The Acadiana Cane Cutters were able to get back on the winning side of the ledger on Friday night after coming up short in a slugfest, rallying in the seventh to come away with a 6-5 win over the Amarillo Sod Squad.

After a one-out double from Ryon Knowles, Peyton McGregor gave the Sod Squad an early 1-0 lead with a well-hit single in the top of the first. Ethan Lege led off the bottom of the first for Acadiana with a triple and was brought home by Carson Jones’ RBI single to even up the contest at one run a piece.

Knowles came up big in the top of the third with a one-out RBI single that got Enrique Porchas across home plate to give Amarillo the lead. Boris Pena gave the Sod Squad a 3-1 lead with an RBI single, scoring CJ Horn.

Ethan Lege got the Cutters within one run with an RBI double in the bottom of the fourth but couldn’t get anything going after the potential tying run was thrown out at the plate.

Cane Cutters started to rally in the bottom of the sixth with a pair of singles to start the inning and put the tying run in scoring position, but the Sod Squad snuffed out the rally by striking out Connor Higgs.

Sod Squad gave themselves a little insurance in the top of the seventh with an RBI double from Horn.

After a leadoff walk to Lege, Acadiana tied it up in the bottom frame off of a bunt by Nathan Carriere that was misthrown and got Ethan home to make it a 4-3 deficit. Ben Van Cleve then gave the Cane Cutters a 5-4 lead with a deep single to center field.

The Cutters extended their lead with a two-out single by Thomas Stevens to get Van Cleve home, making it a 6-4 lead after seven innings.

Things got a little dicey in the ninth with Chipper Menard loading the bases after a two-out walk cut the lead down to one, but the NISH product struck out Matthew Maloney to end the contest.

Menard was brought in to start the 4th inning and held serve, fanning 12 in the win.

Player of the Game: Chipper Menard

The Cane Cutters pitcher put together a masterful performance that kept them in the ballgame, going six innings and only allowing one earned run and striking out the aforementioned 12 batters. The freshman from the Louisiana Ragin Cajuns looked great in his second win of the season in the Texas Collegiate League.

Next Up: Saturday vs Amarillo; First Pitch at 7 pm 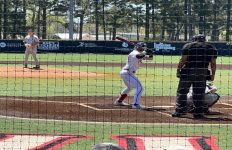