The Houston Astros throughout their postseason run have been able to compete at the plate and keep it competitive. However that all changed on Friday night with a 2-0 loss in game three to the Atlanta Braves where they were held hitless going into the eighth inning.

The Braves broke the stalemate in the bottom of the third with Austin Riley hitting a one-out RBI double to left field that was deflected by Alex Bregman to take a 1-0 lead.

From that point on, it was all about the pitching performance by Atlanta that put the game out of reach for the Astros, holding them hitless headed into the eighth inning, becoming the first team to take a no-hitter through six innings since Jerry Koosman did it for the 1969 New York Mets.

Aledmys Diaz, who was pinch-hitting for Martin Maldonado spoiled the no-hitter bid to lead off the eighth with a bloop single to left field. However, the Astros couldn’t get pinch-runner Jose Siri across home plate after Michael Brantley popped out to end the inning.

Then came the bottom of the eighth and Travis d’Arnaud went yard for the second time in the series with a two-out solo shot to seal the victory and take a 2-1 lead in the World Series.

The Astros had a bad night at the dish with only two hits to speak of and were nearly no-hit for the second time in the history of the World Series.

Player of the Game: Ian Anderson

The Braves starting pitcher brought the gas in a big way, throwing for five shutout innings and striking out four. It may not have been a Cy Young worthy performance based off the metrics, but no-hitting a lineup that is as prolific as Houston’s was pretty impressive.

Next Up: Game Four Saturday; First Pitch at 7:09 pm 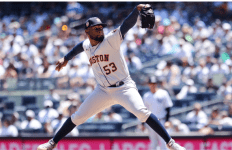 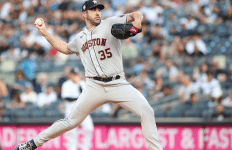