The long-awaited celebration after years of falling short of the mark is now underway for the Atlanta Braves fans after Jorge Soler helped lift the franchise to their first World Series championship since 1995 on Tuesday night by the score of 7-0.

After the first two innings where neither team could gain an edge, World Series MVP Soler busted things wide open and ended Luis Garcia with a three-run home run to that left Minute Maid Park.

The Braves extended their lead to 5-0 in the fifth inning with Dansby Swanson lifting one to left field. Later in the inning Freddie Freeman added a little more insurance with an RBI double out deep to left field.

Freeman put the icing on the cake and the sealed the deal for Atlanta in the top of the seventh with a solo shot to center field, making it a 7-0 contest.

The Astros biggest issue in the World Series was leaving men on base and on Tuesday night, they left a whopping 17 batters on base in the loss.

Player of the Game: Max Fried

The Astros offense was mowed down by Fried, who went six innings and only allowed four hits while striking out six. This was made even more impressive considering his ankle was stepped on in the first inning. 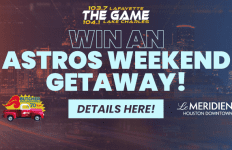