Saturday afternoon was a game that the Louisiana Ragin Cajuns would like to forget with a heartbreaking 67-64 loss to the Troy Trojans that came down to a last-second three by Diamond Morrison.

The Trojans wasted very little time getting out in front with Harriet Winchester nailing a three-pointer off the jump ball, followed up by a nice fastbreak shot from Alexus Dye to make it 5-0 before the first minute elapsed. The Cajuns fought back throughout the first quarter, even tying things up with 1:53 left after Alexandria Goodly made her second free throw. Tyasia more made it a three-point game again though when she went 1-of-2 from the charity stripe with 26 seconds left in the first quarter.

Louisiana struggled in the second quarter from the field, going 3-of-15 and that gave Troy ample opportunities to get even further in front. However, the uncanny ability for the Cajuns to get turnovers made the seven-point deficit at the half a little bit more manageable for the team as they headed into the half.

The Cajuns started to build some momentum to start the second half with a 7-2 run to make it a 31-30 ballgame with eight minutes left in the third quarter. The Cajuns wound up holding their first lead of the contest after a Kendall Bess jumper gave them a 41-39 lead with 3:47 left, but Troy took back control with a 9-2 run to end the third with a five-point lead.

The fourth quarter may have been the most competitive of the afternoon with both teams exchanging the lead a total of eight times. The Cajuns had one final chance to force overtime with three seconds left, but Diamond Morrison’s shot hit the iron and didn’t go in, sealing the victory for the Trojans.

The Trojans crashed the boards in a big way on Saturday, outrebounding the Cajuns 52-34. It was something that coach Garry Brodhead mentioned after the game as something they worked on, but just couldn’t close things out.

Player of the Game: Andrea Cournoyer

Cournoyer was a human highlight reel with 16 points, a pair of fastbreak layups in the second quarter. The sophomore guard even pulled an inbounds pass to herself for the score late in the contest that had many of the men’s basketball players in the crowd losing their collective minds at the trickery by the Merryville product.

Next Up; Thursday vs Georgia State; Tipoff at 7 pm 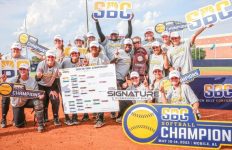 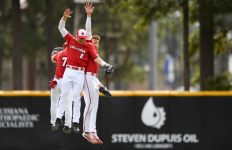