The Louisiana Ragin’ Cajuns women’s basketball team looked to make it two straight wins after last Saturday’s win over rival ULM. The Cajuns kept the game close even with a bad shooting night from three point range, but would fall short to Little Rock, 51-50, due to a couple made free throws late by the Trojans.

Louisiana got the early lead with some made free throws from Makaiya Hallmon, but Little Rock responded with a Azaria Robinson layup.

The Cajuns went on a 6-0 run as Ty Doucet, Lanay Wheaton, and Destiny Rice each scored.

The Trojans would try to bridge the gap with a three-pointer by Dariel Johnson and a layup by Robinson in the last half of the first period.

Louisiana’s Makaiya Hallmon wrapped up the first with a second chance jumper with 40 second left and gave the Cajuns the 10-7 lead.

Dariel Johnson opened up the second quarter with back-to-back three pointers and put Little Rock up 13-10. Louisiana tied the game at 13 with a made free throw by Doucet followed by a Lanay Wheaton layup.

The rest of the first half was back-and-forth scoring as Hallmon scored six points in the final six minutes. The Cajuns ended the half with the 27-24 lead over the Trojans.

After a dry first three minutes of play, Doucet made a layup after a shot clock violation by Little Rock. Tia Harvey responded with a mid-range jumper, but Rice came right back with a bucket of her own.

The Trojans would go on a 15-2 run that lasted over six minutes. Diamond Morrison would cut their deficit to six and Louisiana was down 41-35 after three quarters of action.

The Cajuns would battle back throughout the fourth quarter as Wheaton scored 12 of her team’s 15 points in the period and gave Louisiana the 50-49 lead with 49 second left in the game.

Hallmon tried to hold the lead for Louisiana in the final 30 seconds, but had the ball stolen by Mayra Caicedo and Wheaton fouled Harvey with three seconds left. Harvey knocked down both of her free throws to give the Trojans the one point lead. Louisiana wouldn’t get a shot off as the Cajuns fell to Little Rock 51-50.

The Cajuns missed all eight of their three point attempts in their 51-50 loss to the Little Rock Trojans.

PLAYER OF THE GAME: Ty Douet

Doucet had herself a double-double, as she scored 10 points and grabbed 10 rebounds in Thursday night’s loss to Little Rock. 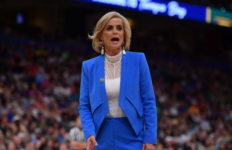