It’s good to be the defending champs.

The Sun Belt announced its preseason football teams and the coaches poll, and Louisiana placed five players on the Sun Belt team, including four on the first team.

Zi’Yon Hill-Green, Eric Garror, Rhys Byrns, and Chris Smith landed on the first team, with Andre Jones being the lone Cajun on the preseason second team.

Smith finished on the first team in 2021 as a specialist and a third-team running back. Smith was Louisiana’s leading rusher last season, carrying 153 times for 855 yards. Also, Smith had one of the top performances in a Cajuns uniform last season, rushing for 238 yards on 24 carries with two touchdowns against Arkansas State last season.

Byrns, a first-team punter last season, led the Sun Belt in punting and was also 11th nationally with an average of 46.3 yards. Byrns, a native of Australia, had 19 attempts over 50 yards, had a season-long punt of 70 yards and placed 21 kicks inside the 20-yard line in 2021.

Hill-Green had a great season for Louisiana in 2021, getting 59 tackles to rank fifth on the team and finish as a second-team all-SBC member. Hill-Green, hailing from New Iberia, finished second on the team in sacks (6.5) and tackles for loss (9.5) for one of the best defenses in the conference. He also had a forced fumble and fumble recovery.

Eric Garror, who also finished on the second team, played in every game as a junior and finished with 23 tackles, seven pass breakups, and two interceptions. Garror was also the punt returner for the Cajuns in 2021.

Jones finished on the third-team as a defensive lineman in 2021 and also earned second-team honors at the linebacker position for the Cajuns. Jones, a Varnado, La. native, finished T-second in tackles with 61. He also finished the season third in tackles for loss (9) and sacks (6) while leading in forced fumbles and fumble recoveries with three in each category. He also led the team in tackles with 6 in the season opener at Texas.

Michael Desormeaux and the Cajuns will kickoff their 2022 season at Cajun Field on Saturday, September 3rd, when Louisiana welcomes Southeastern Louisiana to the Swamp. Kickoff is scheduled for 6:00 p.m. 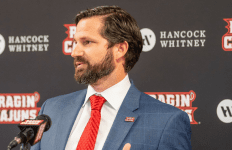