The biggest night in college baseball is headed to Baton Rouge.

“Choosing Baton Rouge for our biggest night was an easy decision,” Mike Gustafson, president and CEO of the College Baseball Foundation, said in a statement. “We know it’s a large and passionate fan base for college baseball. They have convinced us that this year’s festivities will be memorable for all who love the sport.”

The 2019 College Baseball Night of Champions will take place on Saturday, Nov. 2, at the Raising Cane’s River Center Ballroom in downtown Baton Rouge.

The annual event features the inductions of the class of 2019 into the National College Baseball Hall of Fame. This year’s inductees will join the 93 individuals who have been honored since the inaugural ceremony in 2006.

Voting is already underway and the honorees will be unveiled later this month.

“We thank the College Baseball Foundation board for singling out our city for this premier event, which is expected to draw more than 500 baseball fans to our region,” CEO of SportsBR Patrick Coogan said in a a statement. “We showed the foundation that Baton Rouge is becoming a destination for sports of all types, and that college baseball and our city fit hand in glove.”

In addition to having the coach of the year honor named after Bertman, the state of Louisiana is well connected to the foundation.

For more information about the weekend please visit CBFNightofChampions.org.

SEC to Play Only Conference Games in 2020; Start Season Later→ 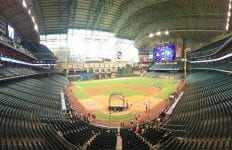