LAKE CHARLES — The McNeese Cowboys played under the lights inside Cowboy Stadium since 2019 but fell short of giving the 11,000 fans something to cheer for. Alcorn State defeated McNeese 30-19 as the Cowboys begin the season 0 and 3.

HOW IT HAPPENED:
Neither team could get anything going offensively in the first quarter as neither team found the end zone in the opening period. Alcorn and McNeese combined for 77 total yards and four punts in the first.

McNeese’s offense managed to put together a scoring drive before halftime with a 24-yard field goal by Garrison Smith.

The Cowboys wasted little time to score to start the third quarter with a 4-play, 62-yard drive, highlighted by a 34-yard run by Deonta McMahon, as D’Angelo Durham scored on a 14-yard touchdown run.

McNeese’s defense forced a punt and the offense was unable to captilize on the stop as Smith missed the 36-yard field goal attempt.

A few drives later, Alcorn State made it a two-possession lead with a 29-yard field goal by Noah Kiani. McNeese responded with quick 5-play, 75-yard scoring drive. Kadum completed passes of 27, 24 and 21 yards, with the last one resulting in a touchdown to Kameran Senegal.

Alcorn pushed its lead back to double digits with a Kiani 38-yard field goal.

McNeese managed to get a safety to make it 27-19 and got the ball back but the Cowboys failed to get any points.

Alcorn would add another Kiani field goal — this one from 21 yards out.

BIG NUMBER II: 8
McNeese committed eight penalties for 90 yards in the loss, with seven of those occurring in the first half.

PLAYER OF THE GAME: DEONTA MCMAHON
The lone bright spot for the Cowboys was the multi-purpose running back. Deonta McMahon led the Cowboys with with 102 rushing yards on 10 carries while also hauling 3 receptions for 42 yards.

UP NEXT: McNeese (0-3) will host Mississippi College on Saturday. Kickoff is set for 7 p.m. 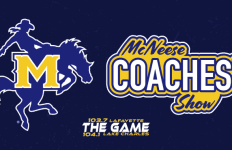 The GAME to serve as home for McNeese Coaches’ Show→