Dustin Poirier may have his next opponent in the octagon.

It was reported today that Poirier will meet with Michael Chandler at UFC 281 in New York City on November 12 in a lightweight bout. Poirier and Chandler have been going back and forth on social media, so it’s not surprising to see this fight getting booked for 2022.

Poirier and Chandler had to be separated at UFC 276 last month, which sparked the fire for this match. The winner of this fight will likely be first in line for a title fight in the lightweight division.

Poirier will enter this fight with a record of 28-7 with one no contest. His most recent fight was a loss to Charles Oliveira at UFC 269. Chandler, on the other hand, will enter this fight with a 23-7 record. His last fight was a “Fight of the Year” candidate due to the kick to the jaw of Tony Fergurson at UFC 274. His previous title bout was a loss to Olivieria at UFC 262. 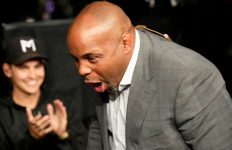 This Saturday Is the Most Important Fight of Poirier’s Career→