HOUSTON — Tony Finau may not have slept well but that didn’t stop him winning the tournament.

Finau led wire to wire to win the 2022 Cadence Bank Houston Open on Sunday by four strokes, as he shot 16-under 264 to cruise to his fifth PGA TOUR victory.

“I think I said it on air right after I finished, when I teed off this morning I felt a little off, honestly,” Finau said. “You know, it’s not easy sleeping on the lead. I just, I didn’t know if I had it in me, but you just take it a shot at a time. I was able to make some big putts on 8 and 9 just to kind of open up this tournament. Really pleased with the performance overall and especially my putting, that was quite a clinic out there over the week.”

Finau closed the final round with a one-under 69, as he became the first 18-hole leader/co-leader to win on the PGA TOUR since he achieved the feat at the 2022 Rocket Mortgage Classic in July.

“You know, when I say I don’t know if I thought I had it in me, I just, sometimes you just don’t know what the day’s going to bring,” Finau said. “Those emotions you just have to fight throughout the day and I was able to fight them and just execute when I needed to. I definitely have the confidence to win and I showed that out there today.”

Finau shot a five-under 65 in the opening round which had him tied for the lead, but he really took control after round two. Finau matched his career-low score on the PGA TOUR by shooting 62.

Finau entered Sunday’s final round leading by four strokes at 15-under, matching the 54-hole tournament record of 195. Finau then saw his four-shot lead balloon to eight shots on the back nine, before finishing with a four-stroke lead at 16-under 264 (65-62-68-69), a Houston Open tournament record.

“I heard a lot of chants, Tony chants,” said Finau, of Sunday’s gallery of fans. “It’s pretty humbling really. I’m a little bit obnoxious to it sometimes when you’re out there playing because I can’t open up and acknowledge everybody because I’m trying to stay as in the moment as I can. But it is pretty humbling to hear I have so many fans, especially here in H-town and it was special to have those fans out there cheering for me.” 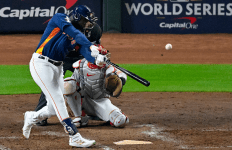 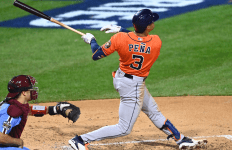 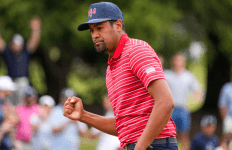 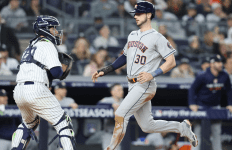