Kevin Foote has seen it all and more importantly covered it all.
From covering high schools athletics to documenting the rise of Ragin Cajun baseball program and the New Orleans Saints, Foote has been a mainstay covering sports for decades.

The Lafayette native brings that vast award-winning experience to the 103.7 The Game airwaves with “Footenotes” airing weekday mornings from 9 to 11.

After graduating from Acadian High (Class of 1984), Foote would go on to attend the University of Louisiana (then known as USL) and served as the sports editor of The Vermilion.

After already working in a part-time capacity for The Daily Advertiser starting in 1983, he would join the staff full time in October of 1986. It wasn’t long after that Foote entered into broadcasting becoming the first to do a local daily sports talk radio show in November of 1993 when he hosted a show at KACY.

Foote currently works for The Acadiana Advocate as the primary beat reporter for the UL Ragin’ Cajuns, as well as covering high school sports. Foote has won numerous awards for his journalism including being named LSWA Prep Writer of the Year four times (2007, 2009, 2011, 2013), LSWA Columnist of the Year (2007) and named LSWA Sportswriter of the Year (2014).

Foote is the proud father of four (daughters Tayler 25, Cassidy 22, Rylie 17 and son Russ 9) and has been married to Michelle McCoy since June 13, 1992. The couple attended five Astros games during the honeymoon.​ 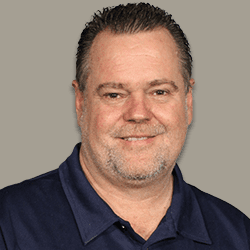