The former Erath High and Louisiana Ragin’ Cajuns star helped the San Francisco 49ers to a 23-17 playoff victory over the Dallas Cowboys in the NFC Wild Card Round on Sunday.

In the game, Mitchell led all rushers with 96 yards on 27 carries and scored the first score of the game, when he took a handoff around the right side for a four-yard touchdown.

After starting running back Raheem Mostert suffered a season-ending knee injury during the opener against the Detroit Lions, the 49ers turned to the sixth round draft pick. Despite missing six games to injuries, the 5-foot-10, 200-pound Mitchell led the team in rushing with 963 yards, averaged 4.7 yards per carry, and scored five rushing touchdowns during the regular season.

Mitchell also broke Vic Washington’s single-season franchise record for rushing yards by a rookie which was set in 1971.

“I love all our backs, but Elijah has played at another level this year,” said 49ers head coach Kyle Shanahan after Mitchell broke the record against the Houston Texans on Jan. 2. “When he’s in there, we’re just very efficient. We always get at least what it’s blocked for and you see how good he reads those gaps and seams to find a way to get through there.”

Mitchell’s regular-season yardage total was eighth best in the NFL and second among rookies behind Pittsburgh’s Najee Harris. His rushing attempts and yards per carry were also the 13th best in the NFL.

“I wouldn’t be able to do that without my offensive linemen,” said Mitchell after the Texans game. “They, all 11, are blocking their butts off for me.”

San Francisco will now face Green Bay in the NFC Divisional Round on Saturday. Kick is set for 7:15 p.m. and you can listen to the game live on 103.7 The Game — Acadiana’s Sports Station. 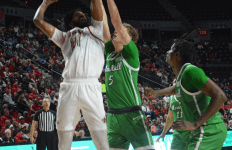