Under longtime coach Garry Brodhead, Louisiana has now had five seasons in which at least two players earn All-SBC players.

Doucet was the Ragin’ Cajuns top player throughout the season, averaging 11.8 points and 8.9 rebounds per game overall, while averaging a double-double in league play with 13.0 points and 11.3 boards per contest.

Doucet also recorded 42 blocks on the season, which ranked third in the league and 70th in Division I.

Hallmon meanwhile was one of the most prolific scorers on the team, ranking second in scoring with 11.7 points per contest overall and 13.6 points in SBC play.

Hallmon led the team in scoring four times this year and has had 15 games with 10+ points, including 21-point performances this season against Troy and ULM.

With its win on Saturday, the Ragin’ Cajuns clinched the No. 3 seed and will play in the quarterfinals of the SBC Tournament on Friday at 5 p.m. in the Pensacola Bay Center. Louisiana will face the winner of (6) Texas State and (11) South Alabama. 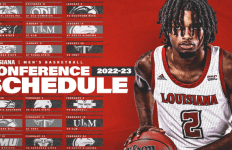