It’s been 33 years since the Louisiana Ragin Cajuns have gone into M. M. Roberts Stadium in Hattiesburg, Mississippi and won a football game. On top of that, it’s been since 1993 that the Cajuns have ever won a game against Southern Miss.

The Golden Eagles (4-3) have won the last nine matchups between the two schools, with the last one coming in the 2016 R+L Carriers New Orleans Bowl.

Now that the Eagles and Cajuns are both in the Sun Belt West, things will get very interesting in terms of a rivalry over the next several years.

“Games like this are great opportunities, you get to go on the road, this week, you get to play on national television” said head coach Michael Desormeaux. “Then you add to it that it’s Southern Miss and it is an old rivalry. It’s a team that’s playing good right now, they’re finding a way to win football games, and they’re going out there and playing team football. So a lot of good opportunity in this.”

The Eagles are led on offense by Frank Gore Jr. and Jason Brownlee, but they’re forced to play a true freshman quarterback in Zach Wilcke, which has caused issues for Southern Miss offensively.

On the other side, the Eagles have played excellent defense so far in 2022, with a devastating run defense. On two different occassions this season, their opponent had negative rushing yards. When asked about what stands out to him about his opponent, Desormeaux said “you have to start with their defense. The last two years, they’ve been really, really good on defense, and this year is no exception. They’re very multiple on defense, they pressure, really from from the jump, and they’ll do it the entire game. But they do a good job with it.”

For the Cajuns, Ben Wooldridge will be the starting quarterback for the third straight game after Chandler Fields went down with an upper body injury. Wooldridge is coming off a career game against Arkansas State where he threw for a school-record five touchdowns.

Fields will be available for this contest, but will not play unless it’s absolutely necessary, according to Desormeaux. Maybe more important is the news that running back Chris Smith will be returning to the lineup in Hattiesburg Thursday night.

For both programs, a win is crucial heading down the back stretch of the season. But with two standout defenses, it’ll come down to which offense can make more plays down the stretch. 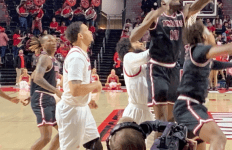