For the second time this month, the Louisiana Ragin’ Cajuns Baseball game at the New Orleans Privateers, scheduled for Wednesday at Maestri Field has been postponed due to possible severe weather in the New Orleans area.

No date has been officially announced in a reschedule of the game.

This is the second time for the game to be rescheduled due to rain as the original time slot for both sides to play ball was for March 9th.

After coming off of a 6-4 win at Southeastern the Ragin’ Cajuns will return to action on Friday when it hosts Georgia Southern for a three-game Sun Belt Conference series at M.L. “Tigue” Moore Field at Russo Park. 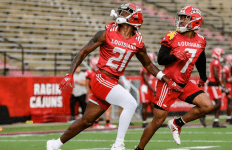