As a teenage bat boy for the Alexandria Aces, Forman listened to the legendary baseball players that came through on barnstorming tours.

As an athletic trainer at Louisiana College, Forman listened to the life lessons bestowed upon him by coaches Billy Allgood and Gene Rushing.

As a young journalist, Forman listened to the stories being swapped by some of the state’s sports journalism titans at Louisiana Sports Writers Association conventions.

“I would always love to go to our conventions,” Forman said. “I would teach myself to sit down and listen. For them, they were just sharing stories, but for me that room was filled with some phenomenal sports writers. If you really listened, they would tell you what you needed to do to make yourself a better reporter and what stories to be looking out for.”

That ability to listen intently helped Forman become one of Louisiana’s most respected and award-winning journalists. Fittingly, he will be inducted into the Louisiana Sports Hall of Fame as a 2022 recipient of the LSWA’s Distinguished Service Award in Sports Journalism.

Forman is one of 12 members of the Class of 2022 going into the Hall June 23-25 in Natchitoches. For participation opportunities and information, visit LaSportsHall.com or call 318-238-4255.

“He is the backbone of small newspaper journalism in the state,” said friend and 2019 DSA winner Philip Timothy. “Whether it is sports, news or politics, he has been there for over three decades.”

Well before that, though, he was quickly bestowed his nickname “Sappo” by his grandfather.

“The day I was born, he took one look at me and said he looks like a Sappo,” Forman said. “He said that it came from a comic strip that was in Chicago newspapers back in the 1920’s. I doubted for years it even existed, but my wife bought a book a few years back at the Chicago Tribune that had the comic strips in it and it was in there.”

Forman grew up in Pineville, just blocks away from Louisiana College, and got his first glimpses into the newspaper business from his father Ray. The elder Forman worked in the composing room at The Town Talk for 27 years.

“To go in the composing room and see how they set type back then,” said Forman. “That was just so interesting to me.”

Forman had a paper route at the age of eight and a passion for journalism, but he also loved baseball, and for four years served as bat boy for the Alexandria Aces. During that time, he would meet the likes of Hall of Famers Satchel Paige, Duke Snider, Bob Feller and Ted Williams.

“I would be sitting in the dugout with them,” Forman recalled. “I remember Satch talking to me in the bullpen. It was just a great experience. People always ask me if I got autographs. I was told never to ask because I was working.”

It was during this time that an unexpected opportunity presented itself. Legendary Town Talk sports editor Bill Carter, a 1988 DSA winner, approached him after a game and told him to go meet Louisiana College men’s basketball coach Billy Allgood, a 1999 Louisiana Sports Hall of Fame honoree.

“He asked me ‘What do you want to major in?’ I said, ‘Journalism,’ and he said, ‘Well, we don’t have that here.’ I finally had to tell Coach that ‘I don’t know why I am here.’ He said, ‘I have been watching you at Bringhurst Field for a few years now, and I want to offer you a full scholarship to LC to be the manager-athletic trainer.’ I said ‘SOLD!'”

Forman spent the next four years getting a behind-the-scenes look at the inner workings of a collegiate program. He was in charge of all the equipment, including the basketballs and tennis shoes, washing and drying practice gear, towels, and game uniforms, and for calling in box scores to the newspaper. Forman did many of those duties on his own time, either before or after class.

“A manager is tremendously important to a sports program,” said Gene Rushing, who was an assistant under Allgood before serving as head coach at LC for 29 seasons. “It encompasses a lot of responsibility. They have to be dependable, dedicated workers. Some people may not realize how much responsibility they have.”

While at LC, Forman witnessed historic moments such as the men’s basketball team earning its first  NAIA Tournament berth in 1979. During that time, he developed a lifelong friendship with Timothy, as both survived Allgood’s infamous road trips from hell on the team’s white bus. Timothy saw first-hand the impact those coaches had on Forman.

“He learned from the best when he was a student at LC,” Timothy said. “Those coaches really had an influence on his life. I think that rubbed off on him. He just transferred that over to his work life.”

“Other than my parents, they had the biggest influence on my life,” Forman said. “They taught me about hard work and how to be humble. I was a naive kid and they helped me grow up.”

He finished his studies in 1980 but put his dreams of being a full-time sports journalist on hold. Forman had to support his growing family (wife Debbie, and eventually four children), so he did everything from selling insurance, working as a plumber and eventually relocated to Eunice to work for a plumbing wholesaler. In addition, he worked as a sports freelancer for the Eunice News and did radio play-by-play.

In 1983, Forman lost his wholesale job due to the oil crash and moved to Bayou Chicot. To make ends meet, he delivered papers for The Town Talk in Evangeline Parish, did freelance work for The Ville Platte Gazette and managed the night shift at a convenience store in Bunkie.

“Garland has a willingness to do anything for anybody,” Timothy said of Forman’s work ethic. “He gives so much of himself he doesn’t know he is overdoing it. He continues to go out of his way to help others. That is what endeared him to people.”

A few years later in 1987 Forman got an opportunity, and never looked back. He was hired as sports editor at the Bunkie Record, and less than a year later became editor – where he remained for 30 years.

Forman did it all, serving as the Record’s lead reporter, editor, page designer and photographer. But his work wasn’t confined to the newsroom … he became a community icon.

For Forman, becoming part of the community was the only way he knew how to operate as a local journalist.

“I felt like I had to prove to the community that I belonged there,” said Forman, who took over as general manager of the Ville Platte Gazette in 2018. “I wanted to be part of the community. People that move from outside the community, it’s a hard transition. I didn’t want that to happen. I made sure to get out in the community.”

That approach helped Forman win hundreds of awards from the Louisiana Press Association and the Louisiana Sports Writers Association. Yet, the awards that matter the most to Forman are not the individual accolades, but having The Bunkie Record win LPA Newspaper of the Year three times (2005, 2006 and 2008).

“It was one of the biggest accomplishments of my career,” Forman said. “It wasn’t something that we were trying to do. We just entered the contest with what we felt was our best work. When we won those awards, it showed that we were giving our community quality journalism.”

Forman became a pillar of the LPA, serving as president and championing public bodies obeying the state’s sunshine laws.

Forman also became a vital part of the LSWA, not just for his infectious laughter during bourre’ games at the convention or pranking friends with a crate of shucked corn as a door prize from the Bunkie Corn Festival. Instead, it was Forman’s tireless behind-the-scenes work putting on all-state meetings, raising funds for the LSWA and hosting conventions, and proudly serving as the organization’s president and a Louisiana Sports Hall of Fame voter. He is the only person ever to serve as president of both the LPA and the LSWA.

“I was given so much when I started out,” said Forman, a past winner of the organization’s Mac Russo Award. “It was important for me to give as much back as I could.”

Forman will now be enshrined with many of his friends, colleagues, mentors and the state’s biggest sports figures. For those who know him well, there is no one more deserving.

“This is the cherry on top of everything he has accomplished,” Timothy said. “If there is one person that deserves this it is Garland. He is so loyal to the LSWA, LPA, and with anything that has to do with journalism here in Louisiana. He can talk to a T-ball player or a U.S. senator in the same breath and doesn’t miss a beat.”

“I am very proud of him and his family in receiving this prestigious award, it’s well deserved and could not happen to a finer man,” Rushing said. “He will be in the same Hall of Fame with Coach Allgood. Can’t beat that, can you?”

“The sports guys from Shreveport or Baton Rouge or New Orleans usually get more recognition,” Hudson said. “I can tell you this. Garland touched nearly everyone around here professionally and personally. There is not anyone around that isn’t proud of him and what he has done.”

For the former neighborhood paperboy, the experience is a hard one to fully accept.

“First off, getting the call that night was surprising and shocking to me,” Forman said. “I don’t know what to really say. I am honored and very humbled.”

Written for the LSWA by Raymond Partsch III. 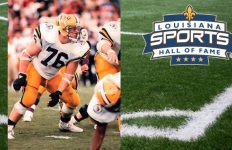 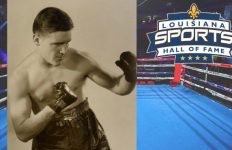 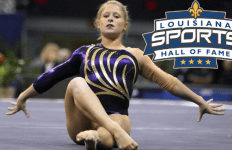