A former Tiger is reportedly headed across the Atchafalaya Basin to continue his collegiate baseball career.

LSU first basemen-outfielder C.J. Willis announced on Wednesday night through his Twitter account (ceejwillis4) that he was transferring to the University of Louisiana and will play for the Ragin’ Cajuns.

In the post Willis wrote, “Excited to announce that I will be starting a new chapter at the University of Louisiana-Lafayette! Thank you to LSU for some of the best year of my life! I will forever be grateful for the relationship and memories I have made there.”

Willis would also become the third LSU transfer to come to UL in the past few years with former St. Thomas More star Brennan Breaux and O’Neal Lochridge transferring to the Ragin’ Cajuns in 2017.

Willis was a highly touted recruit of LSU back in 2019.

Willis earned All-Louisiana First-Team honors from USA Today and All-American honors at Ruston High his senior season after he .375 with 4 home runs, 28 runs scored and 22 RBI. For his prep career, Willis batted .338 with 12 home runs, 86 RBI and stole 21 bases.

Willis was a 39th round draft pick of the Tampa Bay Rays in 2018. His parents Chris and Mandy were also athletes at Louisiana Tech where his father played football and his mother ran track and field.

It is not known at this time how much eligibility Willis will have remaining in his career or if he is eligible to play next season. 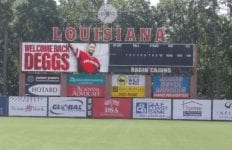