Following a big SEC win over Mississippi State, LSU finished their three-game home stand with New Mexico. The Tigers were able to take care of business as they defeated the Lobos 38-0 off of efficient passing, a good running game, and the defense not surrendering a point.

The LSU defense didn’t stay on the field for long as they forced a three-and-out. New Mexico’s punt was only 25 yards, which set up the Tigers’ offense at their own 43-yard line. Quarterback Jayden Daniels completed passes to four different receivers and running back Armoni Goodwin ran it in from five yards out.

Daniels started the next LSU possession with a completed 51-yard pass to Chris Hilton Jr. The drive ended with a 32-yard Damian Ramos field goal after Daniels misfired on third down.

Jack Bech’s had a 76-yard punt return touchdown that was negated by a block in the back. LSU was able to get to the nine-yard line of the Lobos, but a pass interference that was called on Malik Nabers and a sack by Justin Harris forced the Tigers into third and long. Ramos’ 38-yard field goal attempt would go wide right and New Mexico’s next drive would start at their own 28.

On 2nd & 11, Miles Kendrick completed his pass to Tight End Jaden Hullaby for 38 yards, which was more yards than the Lobos had the entire first quarter. New Mexico’s drive would end with a punt that Bech fair caught at the LSU 12-yard line.

For the final drive of the first half, LSU got down the field and scored their second touchdown as Goodwin got in from one yard out with 23 seconds left. The Tigers converted two third downs and a fourth down on the possession.

LSU got the ball to begin the second half and would end up turning it over on downs after Daniels’ pass was incomplete on fourth down. Daniels would pick up the next fourth down with his legs for a 16-yard pickup. He would go to the tent to be evaluated and Garrett Nussmeier subbed into the game. Noah Cain capped off the drive with a one-yard touchdown to give LSU the 24-0 lead with 5:27 left in the third quarter.

Cain found pay dirt again near the end of the third and scored from 49 yards out as he broke multiple tackles on his way to the endzone. Kyren Lacy put on a couple of Lobos defenders on skates a few plays before to pick up 16 yards on his catch and a first down.

Brian Thomas got in on the scoring action as he scored a 57-yard touchdown, making a cut to the inside to run away from everyone. LSU’s lead was 38-0 with 13:14 left in the game.

LSU was on its way to scoring again, but John Emery Jr. fumbled inside the New Mexico 30 and was picked up by the Lobos’ Bryce Santana at the 28-yard line. The LSU defense forced another three-and-out and the offense of the Tigers ran out the clock as LSU improves to 3-1 on the season with a 38-0 victory over New Mexico.

PLAYER OF THE GAME: Jayden Daniels

Even though Daniels went down with an injury, he had an efficient night, completing 24/29 pass attempts for 279 yards. The LSU QB also connected with 10 different receivers in the game.

The LSU defense stood strong the entire game as they only allowed 88 yards of offense to the Lobos Saturday night. 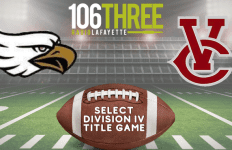 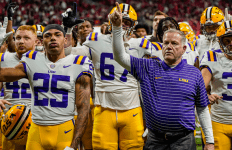