The LSU Tigers came into Tuesday night’s TaxAct Texas Bowl looking to end the 2021 season with a huge underdog win against the Kansas State Wildcats. Wide receiver Jontre Kirklin made the surprising start at quarterback and tried his best, but it wasn’t enough as Kansas State defeated LSU 42-20.

Kansas State opened up the game with possession and took the ball down for 11 plays and totaled 75 yards. The Wildcats star running back Deuce Vaughn had negative yardage in the drive after three carries and the drive finished with a 25 yard touchdown pass from quarterback Skylar Thompson to Malik Knowles.

LSU’s opening drive looked promising as they stayed ahead of the chains the first downs. 3rd down is where the drive fell apart with two penalties on Ed Ingram to make it a third and forever and would end up punting.

The Wildcats didn’t skip a beat and had their second long, sustaining drive, this time ran 18 plays and milked over nine minutes off the clock. Tigers edge rusher BJ Ojulari sacked Thompson to set up a second-and-long early in the drive, but a defensive pass interference on third down kept the drive alive. The defense would hold Kansas State to a fourth down. State rolled the dice and converted with a Thompson three yard run. The drive concluded with a goal line run by Vaughn for the one yard touchdown.

The next drive for the Tigers started at their own nine after LSU’s special teams flopped. Running back Corey Kiner was stuffed twice and Kirklin was intercepted by Russ Yeast on third down, giving the Wildcats good field position.

It didn’t take as long for Kansas State to find the end zone compared to their previous two drives. Thompson completed a pass to Kade Warner for 25 yards on third down and set up shop in the red zone. Three plays later, Thompson connected with Knowles for the second time for a touchdown to give the Wildcats the 21-0 with seven minutes left in the first half.

The Tigers final drive didn’t start the way they wanted as offensive lineman Austin Deculus was called for a false start. Josh Williams was able to pick five yards on the 3rd & 4 to pick up the first down. LSU continued to drive down the field by running the ball with a variety of different players like Kirklin, Kiner and Malik Nabers. Kirklin picked up a big 15 yards on 4th & 2 before throwing a 23 yard touchdown pass to Jaray Jenkins with 20 seconds left in the first half.

The Kansas State special teams returned the ball 36 yards to their own 45 yard line and Thompson completed a pass to Eric Hommel and were now in field goal range with five seconds left. The half came to an end with a missed 54 yard field goal attempt by Ty Zentner.

Supposedly, the LSU Tigers went into the half with a little bit of momentum and looked to take advantage and cut down their deficit. The drive was short-lived as the Tigers had to punt after Kirklin was tackled short of the first down.

The Wildcats continued their offensive success with another quick touchdown drive. Thompson kept it himself for 18 yards and put the ball in LSU territory on the second play of the drive. Vaughn scored his second rushing touchdown from an 18 yard run to give the Cats a nice cushion midway through the third quarter.

LSU got their next drive going quickly with a first down by Kirklin. The Tiger offense would go for it after being stopped short of the first down line and then had a turnover on downs and Williams was tackled a foot away.

After the defense forced Kansas State to punt the ball, Kirklin dumped it off to Brian Thomas Jr for 13 yards and an unsportsmanlike penalty on Yeast added another 15 yards on the gain. Two plays later, Kirklin went deep, but the pass was intercepted by by Ross Elder and returned back for 32 yards.

Thompson and Vaughn made it look easy connecting for the goal line touchdown after Thompson completed his pass to Daniel Imatorbhebhe for 26 yards and Vaughn then ran for 27 yards. The Wildcats now led 35-7 at the start of the fourth quarter.

Following the three-and-out by the LSU offense, State went right back to Vaughn who broke one loose for 48 yards and set his team up in the redzone. Thompson found Phillip Brooks for 12 yard to help set up Vaughn for his fourth score of the game.

The Tigers kept fighting, driving down the field, picking up first downs and getting inside the red zone. Kirklin, on third down, tried to hit a pass in the end zone to Thomas Jr that fell incomplete. On fourth down, with pressure in his face, Kirklin found Nabers in the back corner of the end zone for the Tigers second touchdown from 15 yards out.

The Tigers kept fighting, driving down the field, picking up first downs and getting inside the red zone. Kirklin, on third down, tried to hit a pass in the end zone to Thomas Jr that fell incomplete. On fourth down, with pressure in his face, Kirklin found Nabers in the back corner of the end zone for the Tigers second touchdown.

After a punt by the Wildcats, Kirklin threw an 81 yard touchdown pass to Chris Hilton on the final play of the game to make the score 42-20.

PLAYER OF THE GAME: Deuce Vaughn

Vaughn had a monster game, getting 23 touches, over 140 total yards and scored four touchdown in the 42-20 win over LSU.

Vaughn ran for an average of seven yards per carry as he ran for a total of 146 yards on 21 carries with three rushing touchdowns. 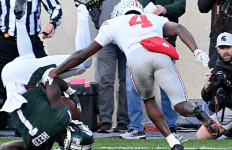 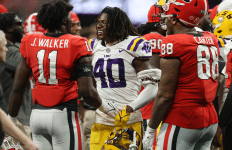