LSU quarterback Jayden Daniels and safety Jay Ward along with Tulane kicker/punter Casey Glover have been named the Louisiana Sports Writers Association Football Players of the Week for their week three performance this past Saturday, the organization announced on Monday.

Daniels and Ward helped lead the Tigers to a 31-16 win over Mississippi State in the team’s SEC opener in Tiger Stadium while Glover was significant in helping Tulane down Kansas State 17-10 on the road by pinning the Wildcats deep in their own territory all game.

Daniels rushed for a touchdown and threw another, leading LSU to an SEC win over Mississippi State. The junior transfer quarterback from San Bernardino, California, completed 22 of 37 passes for 210 yards and a touchdown while also leading the Tigers with 93 yards rushing and a score to total 303 offensive yards in the game. He gave LSU the lead for good, 17-16, early in the fourth quarter with a 3-yard run. He connected with Jaray Jenkins on an 8-yard TD pass in the second quarter to extend LSU’s streak of consecutive games with a passing TD to 45 straight.

On the Tigers’ defensive side, Ward led LSU with 11 tackles, including 1.5 tackles for loss, and added an interception in the victory. The senior safety from Moultrie, Georgia was a key part of the LSU defense that limited Mississippi State to 3-of-14 on third-down conversions and 1-of-4 on fourth-down conversions. His interception came late in the fourth quarter to seal the win. LSU’s defense held Mississippi State to nearly 200 yards below its season average as the Bulldogs managed only 289 yards of total offense (75 rushing, 214 passing).

Glover averaged 41.9 yards on his seven punts with a long of 61 and one that was downed inside the 20 as the Green Wave went on the road to defeat the Big 12 Wildcats. The junior from Jericho, New York also kicked off four times, averaging 64.5 yards there. Of his 11 total kicks, five went for touchbacks and only one was returned as Kansas State’s average drive start for those 11 was inside the 25.

A panel of Louisiana sportswriters votes on players of the Week as each school’s sports information directors nominate players. 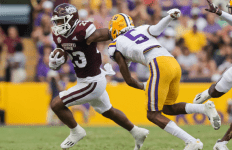