EUNICE — The LSU Eunice Bengals tipped off the 2021 season with a resounding victory inside the HPRE Center.

LSUE raced out to an early lead, made 17 three-pointers and cruised to a 135-79 win over visiting North American University on Friday night.

LSUE’s Jonathan Cisse ignited the scoring early as the former St. Thomas More star drove in the lane and dropped in the two-point floater. Theirno Keita then drained a three-pointer from atop the key and the Bengals were off and running.

The Bengals continued their hot shooting in the second half as they outscored the Stallions 66-45. LSUE would empty its bench as 15 different players scored at least one bucket in the 56-point victory.

LSUE made 17 three-pointers in Friday’s season opener as five different Bengals drained at least two threes in the victory. Joshua Davis made 4-of-6 while Lipscomb hit 4-of-8 from beyond the arc.

Up Next: LSUE (1-0) returns to action on Wednesday when it hosts East Texas Baptist University JV. Tip is set for 6 p.m. 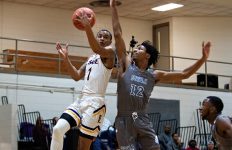