EUNICE, La. – LSU Eunice freshman Chloe helps open up season play for the Bengals in her debut with a no hitter first game, 8-0, over Alvin CC and their 6-3 doubleheader sweep on Tuesday at Lady Bengal Field. Bennet became the first pitcher in LSUE history to hold a team hitless in their Bengal season opener debut.

Bennet’s no-hitter was also the first for LSU Eunice since the last no-hitter by Jensen Howell’s against Baton Rouge CC on April 17, 2019.

During the double header, the Bengals, Maci Baldwin led in offense, collecting a team-high three RBIs and scoring twice.

The Bengals hit the road this weekend in the two doubleheaders in Texas. LSUE will face San Jacinto College on Saturday with McLennan CC following in their twinbill. The Coyotes and Highlasses are ranked in the preseason Division I NJCAA poll.

Chloe Bennett crushed Alvin CC from start to finish as the freshman went the distance to give the Bengals an 8-0 mercy rule win, clutching a no-hitter in her collegiate debut. In total, Bennet struck out ten batters throughout the afternoon, giving up only one single walk in 17 batters in Bennet’s 69 pitches.

LSUE provided all the offense that was needed in the opening frame with back-to-back doubles to open the game with Mari Baldwin driving in Maddie Leal. Madison Prejean would sacrifice a ground out in order for Baldwin to score.

Baldwin pushed the lead to 4-0 for LSUE in the third as the freshman tripled home with a pair of runs with back-to-back home runs to follow from Cendall Barton and Prejean.

Taylor Palmer would secure the run-rule with a wild pitch score from third.

LSU would crawl out of a hole to pull out a 6-3 victory as they open up the season in a sweep of Alvin CC.

After scoring in the opening run of game two, LSUE fell into a 3-1 hole in the second inning as the Dolphins took four hits and walk to take the lead. The Bengals would shutout Alvin in the final innings by Cendall Barton’s relief. Only one hit would be allowed in the 4.2 innings scoreless relief by the sophomore. The rally would start in the fourth as freshmen Madison Diaville and Skylar Cheek would each drive in runs to tie the game, 3-3.

LSUE would outhit Alvin 9-7 as Diaville, Leal, and Baldwin all had two-hit games. 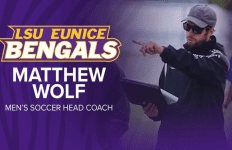