Foster was rewarded after coming out of the bullpen and appeared in four of the Cowboys’ five games last week. He helped McNeese move into a first-place tie in conference.

The pitcher struck out seven batters, recorded two saves, and a win as he didn’t allow a hit, earned run or any walks in six innings pitched.

Against Sam Houston, with two on and two out in the ninth, Foster was handed the ball and was able to secure the save and the win last Monday. At ULM, Foster came into a tie ballgame at three a piece as there was a runner on third and pitched a scoreless inning striking out two batters to send the game to extras.

In game one against Southeastern, Foster threw a season-high four innings in relief and allowed zero hits and zero earned runs as he struck out five to earn the victory in 11 innings. Foster recorded his conference-leading 10th save of the season in the final game of the series sweep over the Lions.

Opponents have a .132 batting average this season against Foster and he’s 3-1 with a 1.14 ERA and 54 strikeouts in 39.1 innings. He sits two saves shy of tying the McNeese single-season save record of 12 which was set by Jordan LeGros in 2011. 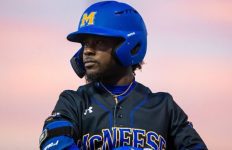 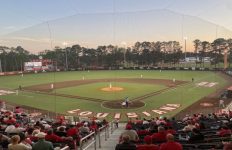