It’s officially playoff season and congrats to all who have made it this far. We’ve gotten slammed with a bunch of news recently that a cluster of players have been placed on the COVID list. Regardless, there will be players who will produce and others that will have a dud in this week’s slate of games.

Malcolm Brown – The Dolphins haven’t gotten the worst with the COVID cases, but most of the hits have been to the running back position. Brown is the only healthy back on the roster at the moment and I expect for him to get a heavy workload with the Dolphins next matchup against the Jets.

Tyler Higbee – The Rams are one of those teams that took a large amount of hits to their roster overall. Los Angeles lost big pieces in Odell Beckham Jr and Darrell Henderson on the offensive side. Matthew Stafford will likely lean of Cooper Kupp, like he has all season, and Higbee who has been a security blanket for the newly acquired quarterback.

KJ Osborn – Osborn has produced the last couple of week with Adam Thielen being out. Kirk Cousins has targeted him a bunch and will go to him still with Chicago dealing with most COVID cases on the defensive side.

Jimmy Garoppolo – Ever since the threat of getting benched, all that Garoppolo has done is win and win big for San Francisco. He will have another opportunity to show out versus a poor Atlanta defense, that has been off the rails and can’t stop anybody on offense. There is a lot of questions at running back with all the injuries and could lead to more throws for the quarterback.

Marvin Jones – All the stocks are up for the Jags after the firing of Urban Meyer earlier in the week. This team will go nuts and have a big win against their rival Houston Texans. Jones could finally have a big game and we will see good signs from Trevor Lawrence, who hasn’t proven why he should’ve been the number one pick in the previous draft.

Mike Evans – The heated rivalry between Evans and Marshon Lattimore has been there since 2017 and Lattimore has predominantly had Evans’ number. Saints head coach Sean Payton won’t be there on Sunday night, but the Black and Gold defense as a whole, feels like Evans’ kryptonite.

Carson Wentz – That Patriots defense has been legit and have shut down opposing quarterbacks all season. Wentz has struggled against the better defenses in the league and will have another bad game versus New England.

Donovan Peoples-Jones – The Browns have caught some of the worst of the outbreak and scarce at wide receiver. Peoples-Jones will likely be their number one guy out there, but I’m not confident Baker Mayfield can get him the ball enough.

Kyle Pitts – Pitts’ rookie season hasn’t been as impactful` as most fans thought he would. His lone touchdown came during week five versus the Jets. The Falcons will play the 49ers, who are top five against tight ends this season and have only given up four scores to the position.

Saquon Barkley – Saquon has been pretty quiet since coming back from his injury. He did score his first touchdown since week four last week against the Chargers though and had a nice fantasy output. This next game will be totally different as Micah Parsons has made a case for not just rookie of the year, but defensive player of the year, and with his help, the Cowboys defense have neutralized opponents running backs all year long. 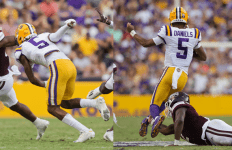