NFL legend John Madden passed away unexpectedly on Tuesday morning at the age of 85.

While most fans may know John Madden for his broadcasting career that evolved into a video game franchise, his legacy as a head coach was something special and played a role in him being inducted into the Pro Football Hall of Fame in 2006.

During his 10 seasons as the Raiders head coach, Madden led Oakland to the playoffs eight times and made an appearance in seven AFC title games, including a span of five straight from 1973-77. The Raiders had fallen short in the championship game in his first five trips, but it was the sixth one that was the charm, resulting in a 32-14 win over the Minnesota Vikings to win the franchise’s first of three Super Bowl titles.

Madden put down the clipboard following the 1979 season and picked up the microphone for a career in sports broadcasting that spanned nearly 30 years.

“On behalf of the entire NFL family, we extend our condolences to Virginia, Mike, Joe and their families,” said NFL Commissioner Roger Goodell. “We all know him as the Hall of Fame coach of the Oakland Raiders and broadcaster who worked for every major network, but more than anything, he was a devoted husband, father and grandfather.

“Nobody loved football more than Coach. He was football. He was an incredible sounding board to me and so many others. There will never be another John Madden, and we will forever be indebted to him for all he did to make football and the NFL what it is today.” 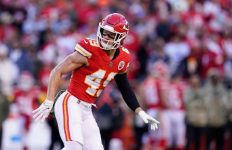