Sunday morning, the four teams that will compete in the XXth College Football Playoff were announced.

Defending national champion Alabama was named as the top seed after thrashing the Georgia Bulldogs in the SEC Championship. The Crimson Tide will face American Athletic Conference champion Cincinnati in one semifinal, with Big Ten champ Michigan facing the Bulldogs in the other.

There wasn’t much surprise in who would be in the group of four, as most of the focus was centered around the seeding.

Did Bama, after underwhelming for most of the season, deserve to be Number 1?

Did Georgia, after getting dragged up and down the Georgia Dome turf, belong as the third or fourth seed?

What about the Wolverines, who outscored Ohio State and Iowa by a combined score of 84-41 over the past two week?

Ultimately, none of those questions matter.

And, quite frankly, neither does the College Football Playoff.

Major college football remains the only sport in the NCAA that doesn’t have hard and fast rules for inclusion or selection for its “playoff.”

There is not now, nor has there ever been, a top-level (Division I, FBS, whatever) football championship for the NCAA actually settled on the field. The bowl/poll system, Bowl Alliance, Bowl Championship Series, and now the CFP, were not designed to make sure that the best team wins a title.

They were designed to declare a national champion, sometimes two, and for the last 40 years or so, to serve as television events that generate millions of dollars for those at the very highest levels of the collegiate sports food chain.

While on social media fans may scream their outrage at Bama constantly getting the benefit of the doubt from the selection committee or the seeming lack of respect for Cincinnati’s undefeated season, but those same people will be glued to their televisions come New Year’s Eve.

An average of around 26.3 million people have tuned in each of the past seven years for the CFP championship game, even with the same teams dominating the final four.

As long as people watch, there is no incentive to change the system to benefit the student-athletes or the fans.

Any expansion of the playoff will be for the benefit of the members of the Power 5 not in the Southeastern Conference. The SEC has claimed 10 of the 32 spots in the CFP since the 2014-15 season (31 percent).

Imagine how many more viewers could be attracted if the major markets on the West Coast and in the Midwest had one more week and another reason or two to stay invested.

Who’s included matters more to the CFP committee than who wins.

The playoff serves a purpose, as does the champion; make money. It’s an unfortunate reality, but a reality nonetheless. 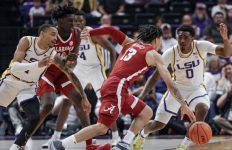