In recent years, LSU has had an offense that revolves around the run game. It’s pretty justified considering the players in the backfield. You’ve had players like Stevan Ridley, Jacob Hester, Jeremy Hill, and Leonard Fournette enter Death Valley and quickly become the crown jewel of LSU’s offense during Les Miles’ time as the head coach of the Bayou Bengals.

With LSU moving full steam ahead into a new era with a new head coach in Ed Orgeron and a new offensive coordinator, it’s expected that things will be done differently. At first glance though it looks like the more things change, the more they stay the same.

“Everything that we do is going to be based around our best player, Derrius Guice.” Orgeron said of the Tigers offense this season, “We feel we have one of the best running backs and one of the best offensive players in the country coming back. Derrius is a great player. He runs the ball like Warren Sapp played the defensive line for me at Miami. He runs with an attitude. He’s a great young man. You’re going to love him. He has a great character and has turned out to be an outstanding team leader for us.”

Guice was a dominant force as a feature back due to Fournette’s injury issues and showed the world how he “runs angry” as a sophomore. That alone shows how this is his team much like how last season it was Fournette’s team when he was on the field.

With that being said, there is a change at least in terms of offensive philosophy. In 2016, LSU went with a passing play 41 percent of the time. That’s almost a 60-40 ratio and in the modern game of college football, that doesn’t always have the end results most fans want.

While Orgeron’s statement about the offense running through Guice seems to echo the same old song and dance, he said something else on Monday that intrigued many.

“Matt runs a very diverse offense, a lot of shifts, motions, use of personnel, fly sweeps. He makes it difficult to defend, but the thing I like best about Matt was he talked about being a team player, and he talked about running a balanced offense, 50 percent run and 50 percent pass.” Orgeron said during his time at the podium.

Look at that last line: running a balanced offense. It sound so simple, but effective because of the weapons that LSU has. You’ve got a star back along with some strong weapons in Russell Gage and DJ Chark for Danny Etling to really air things out.

That leaves the biggest question of them all: will Etling be ready to go for fall camp? While coach Orgeron didn’t divulge much information at the podium about the former Boilermaker, senior Christian LaCouture shed some light on the subject.

“Danny’s a guy that the whole summer, he’s been running, he’s been going everything that he

should.” LaCouture said of Etling, “When we do our defensive line drills, it’s been 7-on-7, and Danny’s been doing everything – no hold backs. I think he’s going to be 100 percent go for fall camp.”

If what the Nebraska native said holds some weight, there might not be as many concerns of this offense as there were after the spring game. 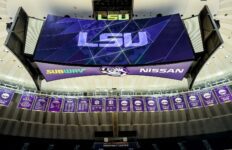