It was a humid Friday night at ML Tigue Moore Field and the vibe of the game was just like the humidity: up and down. ULM would score 5 in the ninth inning to cool down the Cajuns and win Game 2 of the series 7-5.

The game started rocky for Louisiana, walking the first three of the first four batters to load the bases with one out. Ryan Cupit would come home on a wild pitch to give ULM the early 1-0 advantage. Jacob Schultz would settle down and get the Cajuns out of the inning while limiting the damage.

Louisiana would start their half of the first with a triple to right field for Max Marusak, who would come home on a Tyler Robertson double in the next at bat. Robertson would come home on the error by ULM’s first baseman on a Carson Roccaforte grounder. Roccaforte would score on the fielder’s choice RBI for Heath Hood to make it 3-1 Louisiana.

Action in this game stayed pretty quiet through the next few innings, with both teams trading scoreless innings. However, Marusak would get it rolling again in the bottom of the 5th, hitting a double to left, followed by taking third on a wild pitch. Max would later come home on a Robertson single, who would score in the inning as well on a RBI single by Jonathan Brandon to make it 5-1 Cajuns.

ULM would get a single from Austin Beech, who would come around and score off of a Caleb Sterling double to make the score 5-2 after 5 1/2 innings, followed by an empty inning for Louisiana to leave it 5-2 after 6 innings of play.

Bo Bonds would enter the game for Louisiana in the 7th and would only walk one batter as he gets out without a hit or run for the Warhawks. Louisiana would be retired in order in the bottom half of the frame. In the 8th, ULM would get a single but that would be all as Bonds gets them out of trouble. Louisiana would once again go down in order.

Cooper Rawls would enter the game in the 9th to try and seal the deal for the Cajuns, but it wouldn’t be without some trouble. Rawls walked Travis Washburn and Cole Stromboe to open the 9th. With two runners on and no outs, Mason Holt would ground into a fielder’s choice to put runners at the corners with one out. Washburn would come home to score on a balk by Rawls to trim the lead to 5-3. After that, Cupit would single up the middle to make it 5-4. Rawls would get the second out on a fielder’s choice at 2nd, but Austin Beech would respond with a two-run shot to right to give the Warhawks the 6-5 lead late in the game. Rawls would be replaced by Hayden Durke, who gave up a RBI double to Artzberger to increase ULM’s lead to 7-5.

In the bottom of the frame, Louisiana was down to their final three outs and they would get a Max Marusak single with two outs, but a groundout by Robertson would end the contest, with ULM winning 7-5.

ULM had 5 runs on three different pitchers in the ninth inning to put the game away and even the series at 1.

PLAYER OF THE GAME: Tyler Robertson

Robertson had a great night yet again in the losing effort, going 2-4 with a RBI double and a RBI single. Robertson is now at 16 RBIs for the season 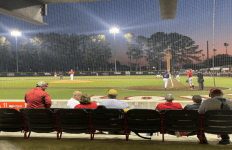 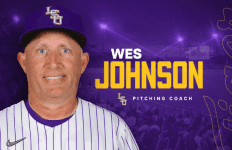