The Louisiana men’s basketball team tipped off the 2021-22 season Tuesday night inside the Cajundome with a 81-47 victory over the University of West Florida.

HOW IT HAPPENED:
The Ragin’ Cajuns jumped out to a quick 5-0 lead as Kobe Julien drained a jumper, Theo Akwuba made a free throw and Greg Williams Jr. hit a mid-range jump shot.
University of West Florida’s Jejuan Weatherspoon got the Argonauts on the board with a jumper. Louisiana responded with a 10-0 run that featured a second-chance dunk by Jordan Brown and an alleyoop dunk by Akwuba.
The Ragin’ Cajuns maintained a double-digit lead for the majority of the first half and held a 41-23 lead at the break. Brown, a transfer from Arizona, led all scorers with 12 points on 6-of-10 shooting in the first half.
UWF came out in the second half with Daniel Sofield hitting a layup but Louisiana answered with a Kentrell Garnett three-pointer.
UWF cut it to a 17-point deficit after a driving layup by Wendell Matthews but Louisiana responded again as Garnett made a layup off a turnover and Williams hit a three-pointer.
Louisiana pushed its lead all the way to 29 points after Brown made a second-chance layup off a turnover with 13:58 left in the second half.
The Argonauts were never able to truly cut into the deficit as the Ragin’ Cajuns rolled to a 34-point victory.

BIG NUMBER: 15
Louisiana’s defense forced the University of West Florida to commit 15 turnovers in Tuesday night’s opener. Eight of those turnovers were steals by the Ragin’ Cajuns.

PLAYER OF THE GAME: JORDAN BROWN
The University of Arizona transfer made a big impact in his first game for Louisiana. Brown shot 6-of-10 from the field for 12 points and pulled down six rebounds in the first half. Brown finished with 14 points, 7 rebounds and 4 assists. 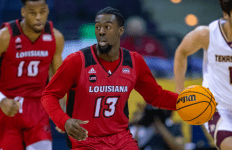 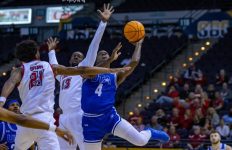