The Louisiana Ragin’ Cajuns were unable to overcome early shooting woes Thursday night as they dropped their third straight game with a 72-66 loss to ULM.
The Warhawks entered the game having won only four games and had lost 10 straight games.

How It Happened:
UL struggled with shooting to start the game as the Ragin’ Cajuns shot a mere 7.7 percent from the field on 1-of-13 shooting. The lone bucket was a three-pointer by Duo Gueye. With less than eight minutes left in the first half, UL had more turnovers (7) than they did points (5).
ULM meanwhile began the game shooting the ball extremely well. Russell Harrison made a jumper off a fast break turnover and then Marco Morency hit a three-pointer. After Gueye’s jumper, the Warhawks went on a 11-0 run to seize control of the game.
With 8:04 left in the half, ULM held a 17-point lead.
The Ragin’ Cajuns fought back and made it a six-point game after a layup by Gueye with 31 seconds left.
The Warhawks answered with a dunk by Morency and then a three-pointer by Elijah Gonzales right before the horn sounded for the half.
ULM led 34-23 at the break.
UL managed to trim the lead down to four three times before a jumper by Cedric Russell made it only a three-point game with 8:12 left in the second half.
ULM answered again with a Thomas Howell dunk and a jumper by Josh Nicholas.
The Ragin’ Cajuns cut it down to three again with a layup by Russell with 2:01 left. After Howell made a free throw, the Cajuns made it three again after Mylik Wilson went 1-of-2 at the free throw line.
ULM made the majority of the free throws down the stretch to pick up the win.

Big Number: 27.8
The Ragin’ Cajuns struggled shooting the ball in the first half making only 27.8 percent of their shot attempts. The team started off 1-of-13 from the field. Even though the team shot vastly better in the second half (53.8 pct.), the early shooting woes were just too great to overcome.

Player of the Game: Theo Akuwba
The Ragin’ Cajuns post player recorded a double-double with 10 points (4-of-6) and grabbing 10 rebounds. 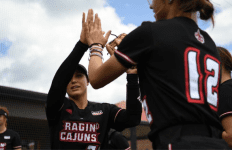 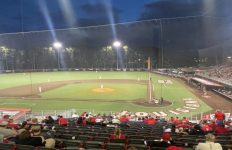