HOW IT HAPPENED:
For nearly the first eight minutes, the two teams went back and forth trading buckets but then Jackson State took control. Ken Evans drained a three-pointer which ignited a 7-0 run for the visiting Tigers.
Louisiana responded with a run of their own and retook the lead with a layup by Kobe Julien. With 8:45 left in the first half, the Ragin’ Cajuns held a 20-19 lead.
Jackson State answered with a 8-0 run and pushed its lead to double digits with a Jayveous McKinnis second-chance dunk. After Gabe Watson made all three of his free throws, the Tigers held a 44-33 lead at the break.
For the first half, Louisiana committed 11 turnovers and shot only 40.6 percent from the field. Jackson State meanwhile shot 55.6 percent.
Louisiana was unable to trim down the lead to start the second half, and Jackson State pushed its lead up to 14 after a McKinnis turnaround jumper with 11:26 left.
Louisiana cut it down twice to eight points, both times off of Jalen Dalcourt three pointers, but each time Jackson State answered with a bucket to make it a double-digit lead.
Louisiana fought back and cut the lead down to two points after a driving layup by Greg Williams Jr. With 26 seconds left, Jackson State held a 72-70 lead.
After Darius Hicks made a pair of free throws after an intentional foul, Jackson State led 74-70 with 24 seconds left. Louisiana brought the ball down but Williams Jr.’s mid-range jumper was off the mark.

BIG NUMBER: 19
Louisiana committed 19 turnovers in Saturday’s game against Jackson State, with 11 of those coming in the first half. The Tigers scored 24 points off of those turnovers.

PLAYER OF THE GAME: KOBE JULIEN
In the losing effort, Kobe Julien led the Ragin’ Cajuns with 15 points on 6-of-13 shooting with five rebounds.

UP NEXT: Louisiana (3-3) will host University of New Orleans on Friday. Tip is set for 7 p.m. 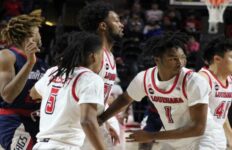 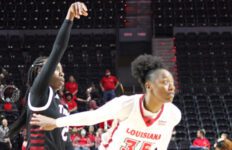 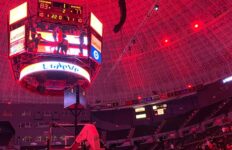