A pair of third quarter defensive plays helped spark the Louisiana Ragin’ Cajuns to a 27-24 victory over the Nicholls Colonels at Cajun Field on Saturday night.

HOW IT HAPPENED:
Louisiana opened up the game by scoring on the opening drive as the Ragin’ Cajuns needed only seven plays to go 80 yards. Levi Lewis completed 5-of-5 passes for 75 yards, including two passes to Michael Jefferson. The drive was capped with a 14-yard touchdown to John Stephens Jr.
Nicholls needed less time to respond as the Colonels went 90 yards on three plays, as former LSU quarterback Lindsey Scott Jr. completed a 65-yard pass to Da’Jean Dixon and then hit Dixon again for a 21-yard touchdown.
Louisiana retook the lead on the next drive as Kenneth Almendares hit a 46-yard field goal. Less than three minutes later, Louisiana added to that lead as Lewis connected with Michael Jefferson for a 46-yard touchdown.
Nicholls did manage to cut into the lead with a 42-yard field goal by Gavin Lasseigne with less than two minutes before halftime.
After the Ragin’ Cajuns stopped the Colonels on fourth and goal, a few minutes later linebacker Kris Moncrief intercepted a Scott pass and returned it 67 yards for a touchdown.
Louisiana would add a 28-yard field goal by Almendares in the fourth quarter to make it 27-10.
Nicholls responded with a 10-play, 75-yard drive which was capped with a 20-yard touchdown pass from Scott to KJ Franklin. That cut the lead down to 27-17 with 5:03 left in the fourth quarter. Nicholls would score again as Scott found Dixon for a six-yard touchdown.

BIG NUMBER: 511
A week after giving up 435 yards in the season-opening loss to Texas, the Louisiana defense had problems with Nicholls’ offense. The Colonels racked up 430 yards of offense with quarterback Lindsey Scott accounting for 511 total yards. Both Lindsey Scott and Da’Jean Dixon set new career highs as Scott threw for 359 yards with three touchdowns while Dixon had 14 receptions for 198 yards and two touchdowns.

BIG NUMBER 2: 25,174
After struggling with attendance during the first few years of the Billy Napier era, Ragin’ Cajuns fans came out in a big way for Saturday’s home opener as announced attendance was 25,174.

PLAYER OF THE GAME: Kris Moncrief
The Ragin’ Cajuns linebacker had a game-changing play in the third quarter as he picked off Lindsey Scott Jr. and returned it 67 yards for a touchdown. That pick six made it a two-possession game and gave the Ragin’ Cajuns a necessary two-score cushion.

UP NEXT: Louisiana (1-1) will return to action on Thursday night when they host Ohio. Kickoff is set for 7 p.m. 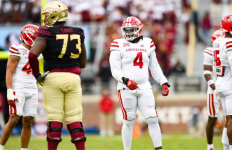 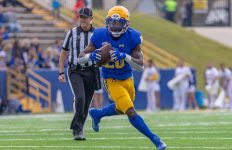 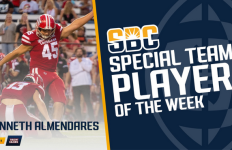 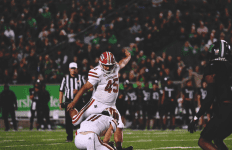