The Louisiana Ragin’ Cajuns overcame a 14-0 halftime deficit, to rout Eastern Michigan 49-21 at Cajun Field on Saturday night. The Ragin’ Cajuns improved to 2-0 on the season.

HOW IT HAPPENED:
Eastern Michigan opened the game with a methodical 13-play, 75-yard drive which was capped with a Samson Evans jump pass to Aaron Jackson in the end zone.

After the game was halted for lightning strikes in the area, play finally resumed and the Eagles would score right before halftime. Powell found Tanner Knue for a 26-yard touchdown.

At the break, Eastern Michigan led 14-0.

After an abbreviated halftime break, the Ragin’ Cajuns got things going offensively in the third quarter.

Chandler Fields first connected with Michael Jefferson for a 27-yard touchdown. That cut the lead down to 14-7. Louisiana’s defense then stepped up with a turnover as Brandon Bishop dove for an interception of Eastern Michigan’s Taylor Powell.

That gave the Ragin’ Cajuns a short field and the offense took advantage as Fields found tight end Johnny Lumpkin in the corner of the end zone for a one-yard touchdown.

Eastern Michigan would respond and tied the game as Powell found Darius Lassiter on a 44-yard reception which set up Darius Boone for a one-yard touchdown run.

Louisiana answered right back with a quick scoring drive as Ben Woolridge round John Stephens Jr. for a 36-yard touchdown.

Louisiana retook the lead again in the fourth on a 20-yard touchdown run by Chris Smith.

BIG NUMBER: 19
A total of 19 penalties for 177 yards were called and accepted in Saturday’s contest, with the Ragin’ Cajuns being flagged 10 times for 100 yards.

PLAYERS OF THE GAME: JOHN STEPHENS JR. & KAM PEDESCLEAUX
Stephens Jr. had a career night as he hauled in three receptions for 103 yards, including one 55-yard pass, and one touchdown. Pedescleaux meanwhile was second on the team in tackles with five and had one interception.

UP NEXT: Louisiana (2-0) returns to action next Saturday when they travel to take on Rice. Kickoff is set for 6:30 p.m. 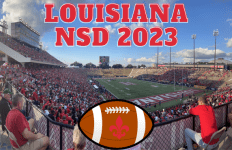 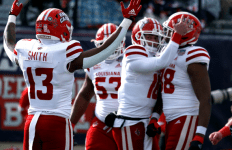 CAJUNS GAMER: Houston rallies to down Louisiana in Independence Bowl→ 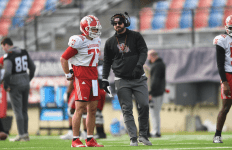