After defeating Troy 7-1 on Friday and Saturday, Louisiana Softball finished the series with a clean sweep as they knocked the Trojans out 10-0 on Sunday.

Troy threatened to get on the board early with Jade Sinness on third and Kelly Horne was walked, but Louisiana caught two pop flies and Libby Baker was struck out.

The Cajuns got on the board early. Maddie Hayden stole second base, courtesy of a wild pitch after being walked. Jourdyn Campbell singled past shortstop to advance Hayden to third, then Sophie Piskos had a sacrifice out to left center field to bring Hayden home for the 1-0 lead after one inning of play.

After a short second inning for the Trojans, Louisiana went right back to work. Alexa Langeliers was walked, then stole second base after a wild pitch. Kayla Falterman recorded the RBI with a triple down right center field. She would then score herself after another wild pitch from Baker. Stormy would get a triple of her own that drove along the right field line, but was stranded as Hayden’s fly out ended the second inning.

Horne reached second base for Troy after a throwing error by Louisiana’s Campbell. The Cajuns held the Trojans in check with a fly out and a line out by second base to for the second and third out.

Karly Heath decided to join the triple club in the third with two outs on the board, but was stranded as Melissa Mayeux was final out.

At the bottom of the fourth, Samantha Graeter was walker, though, Kramer Eschete pinch ran for her. Eschete made it all the way home, thanks to a Falterman single and Kotzelnick hit to Troy’s shortstop, which got Falterman out, but a bad throw to first base got Kotzelnick to second base. The Cajuns led 4-0.

It was three-up-three-down for Troy in the fifth and sixth inning, with four of the outs being grounders.

Louisiana broke the game open at the bottom of the sixth. Laneliers was walked, Graeter recorded a single and Falterman had a perfect bunt to load the bases. Stormy was hit by a pitch, which brought Laneliers home, then Hayden doubled down the right field line to advance Kotzelnick to third and have Falterman and Graeter score. Campbell ended the game with a three run home run down center field for the 10-0 win.

Cajuns Softball managed to record three triple in Sunday’s 10-0 win over Troy to improve to 26-10 on the season. The school record for triples in a game is four, which was set on February 22, 2022.

PLAYER OF THE GAME: Kayla Falterman

Falterman was great at-bat today, going three-for-three, getting two runs and an RBI. 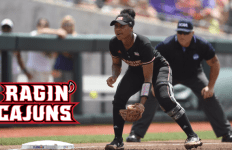