HOW IT HAPPENED:
After forcing Ohio to punt on their opening possession, Louisiana scored on its first possession as Levi Lewis went 5-for-5 on the drive, including a 46-yard pass to Peter LeBlanc down the middle of the field. The drive was capped with Lewis finding John Stephens Jr. for a two-yard touchdown.
Ohio tried to respond with a long drive but the Bobcats came up empty as the 31-yard field goal by Stephen Johnson went wide right.
Louisiana added to its lead early in the second quarter after Montrell Johnson took a direct snap in for a six-yard touchdown run.
Ohio finally got on the board late in the second quarter.
The Bobcats started the drive by running four straight rushing plays for 36 yards and then found the end zone with a trick play. Ohio quarterback Kurtis Rourke lined up at wide receiver, took the pitch and then threw a 25-yard touchdown pass to running back O’Shaan Allison.
Louisiana answered with a touchdown as time expired.
The Ragin’ Cajuns went 64 yards on nine plays and capped the final drive of the first half with Johnson scoring on a one-yard touchdown run with only three seconds left on the play clock.
At the break, Ragin’ Cajuns held a 21-7 lead.
Louisiana added to its lead with its first possession of the second half going 78 yards on 10 plays and was capped as Johnson scored his third rushing touchdown.
The two teams then traded turnovers as Ohio’s Rourke fumbled the ball on a pitch play at the three-yard line. The fumble was recovered by Bralan Trahan.
A few moments later, Lewis’ errant pass near the sideline was intercepted by Ohio free safety Alvin Floyd.
The Bobcats took advantage of the short field as Rourke found Tyler Walton in the corner of the end zone for a 21-yard touchdown.
The Ragin’ Cajuns would add to their lead early in the fourth quarter as Johnson scored his fourth rushing touchdown of the game, and then Chris Smith scored on a nine-yard rushing touchdown. The final score was a 13-yard touchdown pass from backup quarterback Chandler Fields to Stephens Jr. with less than a minute to go.

BIG NUMBER: 311
After combining for a combined 166 rushing yards in the first two games of the season, the rushing attack of the Ragin’ Cajuns came to life on Thursday night. Louisiana rolled up 311 rushing yards and averaged 6.3 yards per carry in the victory.

PLAYER OF THE GAME: MONTRELL JOHNSON
The freshman running back and former De La Salle High star rushed for 84 yards on 13 carries and scored four rushing touchdowns on Thursday night. Johnson became the first Ragin’ Cajuns running back to score four rushing touchdowns in a game since 2014, when Elijah McGuire and Alonzo Harris both scored four each against Arkansas State.

UP NEXT: Louisiana (2-1) opens up Sun Belt Conference play on the road at Georgia Southern on Saturday, Sept. 25th. Kickoff is at 5 p.m. 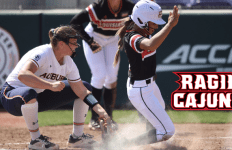