After having both of their Sun Belt Conference games wiped out last week due to COVID-19, the Louisiana Ragin’ Cajuns got back on the hardwood Thursday night as they welcomed the defending SBC Tournament champion Troy to the Cajundome.
Louisiana pulled out a physical 92-83 victory over the team that bested them in the SBC Championship Game a year ago.

HOW IT HAPPENED:
The two teams went back and forth in the first seven minutes of the opening quarter. The largest lead for either team during that stretch was Troy holding a four-point lead with 3:53 left in the first. The Trojans did manage to push their lead to five points after a pair of free throws by Za’nautica Downs with 2:03 left in the first.
Louisiana managed to cut it down to two points as Diamond Morrison hit a jumper with six seconds left in the quarter.
The Ragin’ Cajuns took the lead by starting off the second quarter on a 8-0 run. The Trojans cut the lead down to one after Felmas Koranga hit a jumper with 2:12 left in the second.
Louisiana responded with a 9-0 run to close out the quarter, which was capped by a three-pointer by Makayia Hallmon at the buzzer. At the break, the Ragin’ Cajuns led 42-32.
Troy cut the lead down six points after Koranga made back-to-back jumpers. That was as close as the Trojans would come as the Ragin’ Cajuns kept their lead around double digits. Ty Doucet led the way for Louisiana in the quarter as she scored 11 points, pulled down three rebounds and blocked two shots.
Louisiana entered the fourth with a 61-52 lead.
Troy came out strong to start the fourth as Tiyaj Johnson hit a three pointer and Downs made a layup off a fast break. Lanay Wheaton’s layup pushed the Ragin’ Cajuns lead back up to six.
The Trojans kept fighting back but the Ragin’ Cajuns kept responding and made their free throws down the stretch for the victory.

BIG NUMBER: 56
The officiating crew for Thursday night’s contest was a little whistle happy. Troy and Louisiana were called for a combined 56 personal fouls. The Ragin’ Cajuns took better advantage of those frequent trips to the free throw line making 32-of-39 shots while the Trojans were 20-of-29.

PLAYERS OF THE GAME: TY DOUCET & MAKAYIA HALLMON
Doucet scored 11 of her team high 23 points in the third quarter. The Ragin’ Cajuns senior also had 10 rebounds, 6 blocks and was 11-of-13 at the free throw line. Hallmon meanwhile led the offensive attack in the first half as she scored 16 of her 21 points in the first two quarters. 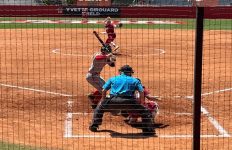 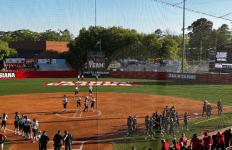