A night after picking up their first victory of the season, the University of Louisiana baseball team suffered a defeat at the hands of Tulane. The visiting Green Wave put up eight runs in the first two innings of Wednesday’s night contest in rout to a 9-6 victory over the Ragin’ Cajuns.

Tulane wasted no time putting numbers on the scoreboard.

Green Wave leadoff hitter Ty Johnson got on the base paths after being hit by a pitch from Batty Brock. Ethan Groff then singled to reach base and both Johnson and Groff scored on a double by Hudson Haskin.

Green Wave cleanup hitter Grant Mathews was then hit by a pitch and he and Haskin scored on a double by Frankie Niemann. A sacrifice fly by Jonathon Artigues scored Mathews and a groundout by Trevor Minder plated Niemann.

Tulane then added to its lead in the top of the second.

Collin Burns led off by being hit by a pitch. After Batty was able to get Johnson and Groff to fly out, Haskin got a single to put runners on the corners. Mathews then stepped into the batter’s box and blasted a three-run home run.

UL’s Batty was pulled after the home run. The final line on the Ragin’ Cajuns starter was eight runs (all earned), five hits, three hit batters in 1 2/3 innings of work.

UL stormed back in the bottom of the fourth inning.

Alex Hannie led off by being hit by a pitch and was joined on the base paths by Brandon Talley who drew a walk. Both Hannie and Talley advanced on a wild pitch and then the bases were loaded with a walk by Justin Greene.

Nick Hagedorn drove in two runs with a single and Greene scored a on groundout by Colton Frank. Brennan Breaux then stepped to the plate and hit a double which scored Frank.

In the frame, the Ragin’ Cajuns scored five runs on only two hits.

UL added a run in the bottom of the fifth.

WIth two outs, Colton Frank reached first after being hit by a pitch and Connor Kimple following with a single. Frank would then score on a double down the left-field line by Jonathan Windham which cut the lead to 8-6.

Tulane added a run in the eighth as Artigues hit a one-out triple and then scored on a single down the first-base line by Trevor Minder.

That proved to be enough as UL was unable to make up the three-run deficit and fell at home to Tulane.

That was the total number of hit batters in Wednesday night’s contest. A total of four Ragin’ Cajuns were plunked, including Colton Frank twice, and three Green Wave players were also hit.

After giving up eight runs in the first inning and two thirds, the Ragin’ Cajuns needed to stop the bleeding and Caleb Armstrong and Brandon Talley did just that. Armstrong and Talley combined to give up three hits, one run, striking out seven in 5 and 2/3 innings of work. The performance of Armstrong and Talley allowed UL to hang in the game despite the significant deficit.

Next Up: UL opens up a three-game series at home on Friday against Virginia Tech. First pitch on Friday is set for 6 p.m. 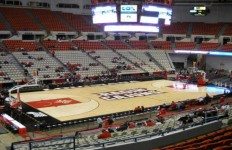