After a stellar 13-0 season, the LSU Tigers may be without one of the coordinators when they take on the Oklahoma Sooners in the College Football Playoff on December 28th.

According to Ross Dellenger of Sports Illustrated, defensive coordinator Dave Aranda is in “serious negotiations” with UNLV to become their head coach. The report goes on to state that the university is promising significant financial support for Aranda’s coaching staff

It’ll be interesting to see what happens next with Aranda’s future with LSU if the reports are true. The Tigers defense ranked 27th in scoring defense, has performed extremely well in the final three games of the season giving up 37 combined points against Ole Miss, Texas A&M, and Georgia.

In Dellenger’s report, he mentioned that Aranda was being considered for the head coaching vacancy at Colorado State. This isn’t the first time that his name has popped up in rumor mills since arriving in Baton Rouge, but this one seems to have the most heat behind it considering his contract runs out with the Tigers in March of 2020.

When Will You Get Your Economic Impact Payment?→ 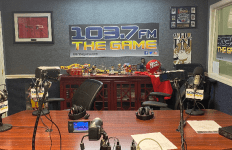