NEW ORLEANS — The final two minutes of Sunday’s game between the Panthers and Saints featured a defensive stand, a missed short field goal, a two-minute drive and then a game-winning kick as time expired.

The dramatic ending favored the home team as New Orleans was able to pull out a 34-31 win over Carolina. The Saints improve to 9-2 overall and 3-1 in the NFC South.

New Orleans opened the game with a 7-play, 75-yard scoring drive capped by a 26-yard touchdown run by running back Latavius Murray. The extra point by Will Lutz was good.

After forcing Carolina to go three-and-out, New Orleans put together a promising drive but it stalled and the Saints were forced to punt but that turned out not to be a bad thing.

With the short field, Saints scored a few plays later when Drew Brees found a wide open Tre’Quan Smith in the right corner of the end zone for a 13-yard touchdown. The extra point was good and the Saints held a 14-0 lead.

Carolina would answer with a quick drive of their own as Kyle Allen found D.J. Moore, who ran past P.J. Williams, for a 51-yard touchdown. The extra point by Joey Slye was no good.

The two teams traded field goals in the second quarter as Lutz and Slye both kicked 41-yard field goals.

Carolina would take advantage of a miscue by New Orleans.

The Panthers had the ball on their own 39-yard line and were facing a 3rd and 16 when DeMario Davis sacked Allen. The Saints were flagged for unnecessary roughness at the end of the play as Cam Jordan threw his arm and hit Allen.

That seemed to give Carolina a boost and the Panthers would go the length of the field and Allen would find Christian McCaffery for a 1-yard touchdown with three seconds left before halftime. The Panthers went for the two-point conversion by the pass from Allen to Moore was broken up by Chauncey Gardner-Johnson.

After forcing Carolina to punt to start the third, New Orleans added to its lead with a 8-play, 62-yard drive capped with a 20-yard touchdown pass from Brees to tight end Jared Cook.

Carolina responded with a 8-play, 41-yard drive that ended with a 52-yard field goal by Slye but New Orleans answered right back on the following drive. Brees found Michael Thomas for a 3-yard touchdown.

Carolina then would score 13 unanswered points.

Carolina first put together a 7-play, 71-yard drive capped with a 4-yard touchdown run by McCaffery. The extra point attempt though went wide right and the Panthers trailed 31-24 at the end of the third quarter.

Carolina would tie the game in the fourth quarter when Allen found Moore for a 2-yard touchdown. Extra point was good and with 9:23 left in the regulation the game was tied 31-31.

Carolina put themselves in position to take a late lead and into the red zone, and was helped by the Panthers winning a challenge on pass interference, but Slye’s 28-yard field goal was no good.

New Orleans took over and marched down the field (11 plays, 65 yards), highlighted by a 24-yard reception down the right sideline by Thomas on third down.

The drive ended with Lutz coming out and kicking the game-winning field goal from 33 yards out.

The Saints were flagged 12 times for 123 yards in Sunday’s win while the Panthers were flagged only 3 times for 25 yards. There were two big calls that went against the Saints with the first being the unnecessary roughness call on Jordan that seemed to spark a touchdown drive for the Panthers. The other was the defensive pass interference call (as a result from a challenge) on third down on the Panthers’ final drive of the game. That gave Carolina another fresh set of downs to score a touchdown but Saints defense stood tall.

Player of the Game: Michael Thomas

Next Up: New Orleans will play Atlanta this Thursday (Thanksgiving night). Kickoff is set for 7:20 p.m. 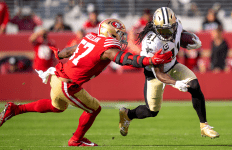