The Saints headed to Landover, Maryland to take on the Taylor Heinicke lead Washington Football Team on Sunday. After a couple first quarter turnovers by the Saints offense, New Orleans took over the game and won 33-22 as they head into their bye week.

The Saints would receive the ball to start the game. On third down, Jameis Winston would hit Kenny Stills on a slant for 11 yards and pick up the first down. Winston two plays later would try to connect with Taysom Hill on a crossing route, but was hit as he threw and was intercepted by Cole Holcomb and returned to the New Orleans 31 yard line.

The Saints Defense hold the Football Team to a field goal after they only mustered up five yards on three plays. Washington took the early 3-0 lead with two and a half minutes run off the game clock.

New Orleans’ second drive only lasted three plays too, but on 3rd & 7, Winston found Deonte Harris wide open on a deep post route and scored the first touchdown of the game from 72 yards out.

Washington would march down the field on their following drive that lasted 12 plays and took six minutes off the clock. Marshon Lattimore would force an incomplete pass on third down in the end zone and make the Football team settle for a second field goal.

Winston on first down swung the ball out to Alvin Kamara, who was able to make the play a pitch and catch for 20 yards. Defensive end Chase Young was able to get the strip sack on Winston a couple of plays later and was picked up by Daron Payne and was the Saints second turnover of the first quarter.

After a three-and-out by the Football Team’s offense, their drive was renewed off of a roughing the kicker penalty caused by Carl Granderson. The next play, cornerback Bradley Roby would get called for pass interference and scoot the Football Team closer to pay dirt. It took four plays after that to find the end zone and regain the lead courtesy of a five yard touchdown run by Antonio Gibson.

Saints had a response of their own, getting Hill and Kamara involved early in the drive. Hill would have to be carted off the field and wouldn’t return from an unnecessary roughness was called on a Washington defender where Hill took a shot to the head area. The possession would finish with a 23 yard Kamara touchdown run. Newly signed kicker Cody Parker would miss the extra point and keep the game tied at 13 with under 11 minutes to play in the half.

Washington started to build off the momentum of scoring on their previous drive, Heinicke connected with three different receivers as they got into Saints territory. A shot near the end zone was taken by Heinicke to Curtis Samuel, but was slightly underthrown and intercepted by corner Paulsen Adebo at their own two yard line. That gave two rookie his second pick on the season as both have been or near their own endzone.

Neither team the next four drives could put up any points as there were three punts and a turnover on downs by the Football Team.

On the final play of the half, Winston would throw a Hail Mary from 49 yards out and have the pass be brought down and caught for a touchdown by Marquez Callaway. Parkey would make the point after and New Orleans lead 20-13 at half.

Out of break, four more punts were exchanged by the teams, none that lasted more than five plays. Washington would sustain a 14 play, 69 yard drive that took over seven minutes off the clock. Gibson would record six total touches on the possession, but would be forced to kick another field goal and cut their deficit down to four points.

New Orleans for the third time to start the second half would end their drive with a Blake Gillikin punt that sat Washington down at their own two yard line. Heinicke didn’t connect on any of his three passes that drive and on third down was intercepted for the second time on the afternoon, this time by PJ Williams at the Washington 26 yard line.

The short field would swing the momentum in the Saints favor and Winston would find Callaway for the second time of the game and score from 12 yards out. New Orleans lead 27-16 with 12 minutes left to go in the game.

Gibson would find pay dirt on the ground again and shrink the Saints lead down to five points. Washington would try to go for two but Heinicke’s pass attempt to JD McKissic would go incomplete.

The Saints would ice the game away after Winston found Kamara for the dump off and score from 19 yards away. Winston made some big plays on the drive that included a 32 yard connection to Adam Trautman and took it himself on a QB sneak on 4th & 1 to keep the drive alive.

The defense of the Saints would secure the win after they forced a turnover on downs and and ran the last couple of minutes off the clock as New Orleans beat the Football Team to improve to 3-2 on the season.

Jameis Winston connected on multiple deep passes throughout the contest and had four touchdown passes. Two to Callaway and one each to Alvin Kamara and Deonte Harris.

PLAYER OF THE GAME: Jameis Winston

Winston’s 280 passing yards and four passing touchown’s, including a Hail Mary to end the half was crucial in the victory over the Washington Football Team.

NEXT UP: BYE WEEK 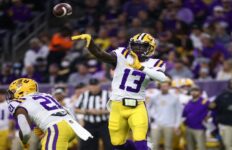