The New Orleans Saints Monday afternoon added more depth to the linebacker room by signing Jon Bostic. The former second-round 2013 draft pick was selected by the Chicago Bears but has bounced around the league, most recently playing for the new Washington Commanders from 2019 to 2021.

Players like Demario Davis locked up his spot and Pete Werner’s spot looks secure, but others like Chase Hansen and Kaden Ellis will be competition for the veteran. 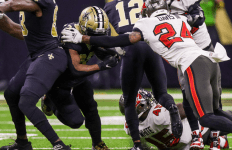