The New Orleans Saints drafted a quarterback after all.

A day after trading all of their remaining picks in the 2020 NFL Draft to trade up to select a tight end from the FCS level on Friday night, the Saints got back into the final round of the draft and selected a quarterback Saturday.

New Orleans traded its 2021 sixth round pick to Houston for pick No. 240. With that pick, the Saints drafted former Penn State and Mississippi State quarterback Tommy Stevens.

In his lone seasons at Mississippi State, the grad transfer struggled with consistency and was benched. Stevens threw for 1,115 yards, 11 touchdowns while rushing for 381 yards and four touchdowns. 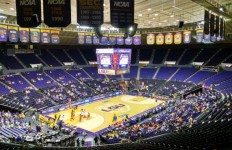