The New Orleans Saints went into Sunday’s game as six point home underdogs. After Tom Brady and the Tampa Bay Buccaneers scored first, the Saints responded with 23 straight points. In that time Jameis Winston went down with an apparent ACL injury and wouldn’t return. Brady would lead the team back within one score late in the game, but was intercepted by safety PJ Williams as he returned it all the way for a touchdown to seal the deal and give the Saints the win.

The Saints would force a three-and-out on first drive of the game and start at their own 14 yard line. On 3rd & 9, Winston would scramble for a 20 yard gain and the first down. For the next third down, Winston found Marquez Callaway, who was tackled a yard short of the first down. Coach Sean Payton went for it on fourth down and dialed up a hand-off to Alvin Kamara. Kamara was stuffed at the line of scrimmage and set up Brady and the Bucs offense with a short field.

Starting at the New Orleans 44, Brady completed a short pass on third down to Chris Godwin, who turned it into a 25 yard pickup. An offensive holding penalty would make it 1st & 20 from the New Orleans 25 yard line. After completing a pass to Leonard Fournette for 13 yards and a pass broken up by Malcolm Jenkins that was intended for Rob Gronkowski, Godwin would get the ball again on third down and put the game’s first points on the board.

The Saints moved methodically down the field, almost six minutes off the clock in the process. On the 11th play of the drive, from the Tampa 16, Winston found Tre’Quan Smith on a corner route in the endzone for the first Saints touchdown of the day.

Both team traded punts after getting first downs early in their drives. Winston would get injured early in the drive and would not return to the game. Once the Bucs got the ball back, Brady went to Godwin for another 20 yard catch. Tyler Johnson got involved catching a pass that went for 31 yards, but on 3rd & 6 from the Saints 31 yard line, Cam Jordan stripped Brady of the ball and David Onyemata fell on it to give the Saints possession again.

Starting at their won 37, Trevor Siemian lead the Saints offense for the rest of the gain. Siemian hit Deonte Harris for 14 yards on 2nd &11 and Garrett Griffin caught two passes for 26 yards total. On 2nd & 12, Siemian couldn’t connect with Kamara, Bucs linebacker Devin White was called for roughing the passer and reset the downs at the Tampa 14. Siemian the next play threw an interception in the back of the endzone, but another roughing the passer penalty was called, this time on William Gholston. Even with the multiple resets of down, the Bucs defense stood tall and forced a field goal. Brian Johnson made the 23 yard field to take the 10-7 lead with 2:20 seconds left in the first half.

Following a 24 yard by Giovani Bernard and the two minute warning, Brady was looking to hit Godwin again, instead CJ Gardner-Johnson picked Brady off and returned it 26 yards to the Tampa 35 yard line. Mark Ingram fought forward for 11 yards on the first play. Siemian then found Smith near the sideline, Smith shook his defender and picked up 15 yards before going out of bounds. On 3rd & Goal, Payton called for a play action and Siemian connected with fullback Alex Armah for the one yard touchdown grab. Johnson missed the PAT and the Saints now lead 16-7 and went into the half preparing to receive the second half kickoff.

With the Saints getting the ball to start the second half, the Saints drove down the field again to extend their lead. To open the drive, Siemian went deep to Kevin White, who came down with the 38 yard grab and was White’s first catch in over three years. Four plays later on fourth down, Siemian found Harris in the middle for the first down. Kamara ran for 15 yards the next play to make it 1st & Goal at the Bucs 10 yard line. The Tampa defense stopped Smith just short of the goal line on third down. New Orleans went for it again, this time with a pitch to Kamara the wide side of field as he walked in for the score.

Tampa would start to make their comeback, on the fifth play Brady found Godwin, this time catching the ball in the middle, breaking a tackle and scampering for 44 yards. Fournette caught the ball for eight yards and fumbled into the endzone, Gardner-Johnson picked it and then fumbled himself before being able to get out the endzone and a Saints player fell on the ball. The play after review was reversed and called an incomplete pass and the Bucs maintained possession. On third an short from the New Orleans seven, Brady hit Bernard for the touchdown.

The Black and Gold would have to punt after going backwards in three plays. Brady missed on a touchdown to Mike Evans in the first half by over throwing him. This go around, Brady put the ball right on the money to Evans and scored from 41 yards away. Tampa Bay cut their deficit from 16 points down to two within four minutes, now only 23-21 with a minute left in the third quarter.

The following possession for each team was a punt. New Orleans after the Bucs punt would start at their own 34 yard line. The offense would threaten by getting to the redzone, but would have to settle for a 35 yard Johnson field goal to make the Saints lead 26-21 midway through the fourth quarter.

A busted coverage by the Saints secondary left Bucs receiver Cyril Grayson all alone as he scored from 50 yards out and put the Bucs back on top by one.

New Orleans went into chew clock mode running down four of the last five and a half minutes of the game. Keeping themselves ahead of the chains most of the drive. The would stall at the Tampa five yard line and kick another 23 yard field goal. Saints lead 29-27 with 1:41 in the game.

Brady looked to add an additional comeback win to his record, as him and his offense had plenty of time and two timeouts to work with. PJ Williams on the second play of the drive to nullify any chances of that by intercepting the quarterback and taking it all the way back to the house. A fourth down stop the next drive and a victory formation made the win official as the Saints defeat the Bucs 36-27 and improve to 5-2 on the season.

The Saints defense created three turnovers, including a pick-six late in the fourth quarter on Brady in Sunday’s contest to lift them over the Bucs.

Player of the Game: Trevor Siemian

Siemian didn’t play scared or conservative and captained the offense to multiple touchdown and scoring drives in the big win over the rival foe. 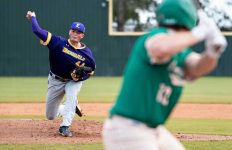