The St. Thomas More Cougars finished the 2020 season much like they did in 2019, with another state championship victory in a thrilling 35-28 contest by De La Salle.

The game started off in interesting fashion with the Cavaliers opening with an onside kick and the Cougars wasted no time taking advantage of the short field, scoring off of a 29-yard touchdown pass from Walker Howard to fellow LSU commit Jack Bech to go up 7-0. De La Salle responded in quick fashion, tying things up with a 28-yard touchdown run by Montrell Johnson.

After quick scores by both teams, both defenses came up big, forcing a turnover on downs during the next two drives. St. Thomas More took back control of the contest in the second quarter with Christopher Morton walking into the endzone from five yards out. The Cougars executed a sky kick perfectly, recovering it in Spartan territory and Howard found Paxton Perrett on the very next play to take a 21-7 lead.

The Cavaliers made it a seven-point ballgame with a 14-play drive that ate up nearly eight minutes off the clock and was capped off by an eight-yard touchdown run from Johnson, his second of the night. St. Thomas More marched down the field, but they were stopped inside the redzone, keeping it a 21-14 ballgame.

After a scoreless third quarter, Johnson secured his third rushing TD of the game for De La Salle on 4th-and-goal to open up the final quarter of play, tying things up at 21. The Cougars quickly responded to take the lead back with a 38-yard touchdown pass to Bech to go up 27-21.

The blocked extra point for STM loomed large with De La Salle taking the lead for the first time in the state title game with Johnson running it in from 14 yards out to take a 28-27 lead with 5:45 left in regulation.

The Cavaliers had one more chance to come away with the win, but the Cougars defense came up with the biggest play of the contest, deflecting the halfback pass attempt on 4th and 12 to seal the second straight state championship.

LSU commit Walker Howard ended his junior campaign with another big performance through the air with 381 yards through the air and 4 touchdowns on the way to a state championship victory.

The LSU commit for the class of 2021 was all over the place in the Division II State Championship, racking up 10 catches for 232 yards and two touchdowns. 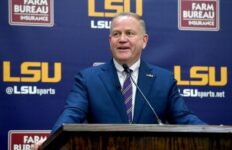