The Kansas City Chiefs rallied from 10 points down in the second half to win their second Super Bowl in franchise history, and 50 years after the team’s last win in Super Bowl IV, with a 31-20 victory over the San Francisco 49ers at Hard Rock Stadium in Miami on Sunday night.

Also, winning a Super Bowl was former University of Louisiana record-setting running back Elijah McGuire who is a member of the Chiefs’ practice squad.

After forcing Kansas City to go three-and-out on the first possession of the game, San Francisco opened up the game with a 10-play, 62-yard drive that ended with a 38-yard field goal by Robbie Gould.

Kansas City responded with a 15-play, 75-yard scoring drive which was capped  with a 1-yard touchdown run by quarterback Patrick Mahomes.

The Chiefs defense then came up with the first turnover of the game as Bashaud Breeland intercepted a pass intended for Deebo Samuel from Jimmy Garoppolo. Kansas City’s offense then went 43 yards on 7 plays but were unable to find the end zone and had to settle for a Harrison Butker 31-yard field goal.

San Francisco scored its first touchdown on the ensuing drive as the 49ers went 80 yards on 7 plays and Garoppolo threw a 15-yard touchdown to fullback Kyle Juszczyk.

San Francisco opened up the second half with a 9-play, 60-yard drive as Gould  made a 42-yard field goal.

The 49ers’ defense then stepped up by forcing a turnover of their own as F. Warner picked off Mahomes. That turnover led to a 6-play, 55 yard scoring drive which was capped with a 1-yard touchdown run by Raheem Mostert. With the extra point, San Francisco held a 20-10 lead with 2:35 left in the third quarter.

The 49ers appeared to have seize control of the game when T. Moore intercepted a Mahomes pass that went off the hands of Tyreek Hill. The Chiefs defense though held and forced the 49ers to punt the ball.

Kansas City’s defense then forced its first three-and-out of the game with 5:18 left in the game. The Chiefs offense took full advantage of the defensive stand.

Kansas City marched down the field with a 7-play, 65-yard drive and Mahomes threw a 5-yard touchdown to Damien Williams.

Kansas City’s defense answered again as Garoppolo was sacked on fourth down. The Chiefs then needed only two plays to score as Williams found the end zone on a 38-yard run.

The Chiefs defense would answer with another turnover as Garoppolo’s deep pass was intercepted by Kendall Fuller. Kansas City then ran the clock out, rather threw the clock out as the final play was a deep pass, for the victory.

Entering the fourth quarter, San Francisco led Kansas City 20-10 but the double-digit proved to be not enough. The Chiefs would outscore the 49ers 21-0 in the final quarter and pulled out the 31-20 victory.

Player of the Game: Patrick Mahomes

Mahomes overcame two interceptions to lead the comeback victory as he led three touchdown drives in the final quarter. Mahomes ended the game completing 26-of-42 passes for 286 yards with two touchdowns and the two interceptions. Mahomes also had 29 yards on 9 carries and one rushing score.

Up Next: The NFL Combine in Indianapolis will be held from February 23rd to March 2nd. The NFL Draft will be held in Las Vegas from April 23rd to the 25th. 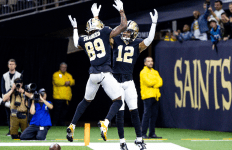 MECHE’S FRIDAY FIVE: What to watch for in Saints-Panthers→