Let’s do it! Tim Tebow needs to be back in the NFL! I know it, you know it, we all know it! Ok ok, I’m Tebowing as I do on a somewhat daily basis.

The 2-5 Houston Texans just released Ryan Mallett in part due to missing a team flight which is just inexcusable at this level. The Texans have no life with one Brian Hoyer under center. The once talented defense has lost it’s luster to want to play hard knowing their offense just flat out sucks right now.

Let’s bench Hoyer and sign the greatest man-crush of mine and one of the most successful QB’s ever in….Tim Tebow! Just do it! Tebow will bring major life back into the Texans, pump up the fan base, and hell they’re only one game back of the 3-4 Colts in the terrible AFC South.

Tebow is a winner. We don’t know how he wins. Sure, the stats aren’t all that great. But you can’t name me one better motivator for a team than the former Florida Gator. You can’t hate the man’s beliefs and all we need to do is say “we believe in you Timmy!” and I rest assure you, he will win! Mark my words: If Houston signs Tebow and starts him right away, the Texans will win the AFC South this season! What more can you ask for out of Bill O’ Brien’s squad?

Thank you for hanging out with me on the sidelines. Until next time, have a nice day, a goodnight, and a better tomorrow to you all! 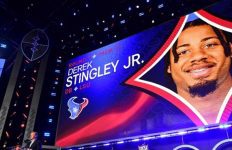