LSU Tigers held down the leading rusher in the country in DeWayne McBride with 38 yards for domination win 41-10.

After two small passes by Jayden Daniels, Malik Nabers came up with the 47-yard reception onto the 27-yard line. John Emery Jr. runs in the endzone for a Tigers touchdown on the 9th play. Damian Ramos was on the good PAT, for LSU to be up with 10:44 left on the first quarter 7-0.

From the 35-yard Nathan Dibert with a 61-yard kickoff and a 66-yard return to the 40 for UAB. Only two plays later and in 1:12 Blazers make the 5-yard run touchdown by leading rusher, DeWayne McBride.

4th downs were nowhere to be seen after three touchdown drives as LSU takes eight plays for their second touchdown of the game. Noah Cain ran in the 5-yard scoring run with Ramos on the good PAT. Tigers led 14-0 with only 5:59 left on the first quarter clock.

At the end of the first quarter the Tigers held the Blazers to the 12-yard line with a 6-yard loss and sack by Ali Gaye. UAB went for the 29-yard field goal and comes back in the second quarter to bring the score to 14-10.

Tigers glided down the field with back-to-back passes by Daniels to Mason Taylor and Nabers for a total of 52 yards. Emery Jr. rushed for a gain of 4 yards leading to a forced fumble by Keondre Swoopes and was recovered by Blazers Noah Wilder causing a turnover at the UAB 8-yard line.

Blazers gained no points on the board in their five-play drive with a 51-yard punt received by Gregory Clayton Jr. to end the drive.

Tigers came up with the 8-yard gain on the return that was nullified with a 15-yard penalty by personal foul on Jack Bech. Daniels kept the ball in his play-makers hands with Nabers and Cain with the scoring touchdown drive by Cain of 1-yard.

With 48-yards rushing UAB doesn’t ends their drive with no gain. Four plays and 56 yards later LSU runs in another touchdown to extend their lead to 18 points with Cain scoring his second back-to-back touchdown. They go to half with their score 28-10 in favor of the Tigers.

Three drives and eight minutes of the second half, neither team were able to gain any points on the board. LSU took back the ball with a sandwiched penalized drive by Jaylen Key to Daniels by personal foul and horse caller. Forty yards later, Daniels scrambled and kept the ball for the two-yard touchdown. Ramos missed his first PAT attempt gave the Tigers a 24-point lead.

Turnover of downs by the Blazers with three back-to-back incompletes as they tried to go for it on fourth down at the LSU 15. Tigers rushed for 34 yards to the UAB 42 before the end of the third quarter with a 34-10 lead.

Emery Jr. on the second fumble that was again recovered by Swoopes. Blazers continued to be on point gain drought.

Tigers gave Blazers another three and out for a 55-yard punt and 2-yard return by Clayton Jr. LSU gave it their all and dominated with 7-9 completions for a 5-yard pass up the middle to Brian Thomas Jr. for the final scoring drive of the game with 9:46 left on the clock.

With the last three scoreless drives of the game both starting quarterbacks came out with Daniels being short by 3 yards for a 300-yard game.

PLAYER OF THE GAME: Jayden Daniels and Malik Nabers

Daniels led the way for his team with 297 yards and one touchdown for a 76% completion rate and 173.3 passer rating. He couldn’t have done it without his teammates in Nabers with 129 yards receiving at 18.4 average per carry.

Cain had led the team with three total touchdowns. 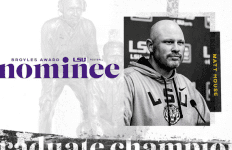