BATON ROUGE – The LSU Tigers have posted a number of shocking performances during Ed Orgeron’s tenure, but what happened on Saturday ranks among the biggest of them all.

Damone Clark’s interception with 1:59 put the cherry on top of this most unlikely sundae. The Tigers picked off Florida passers four times on the day.

LSU ran for 321 yards as a team, against a Florida defense that had been allowing opponents averages of 110.8 yards per game and 3.2 yards per carry.

While the crowd was noticeably smaller than the announced number of more than 96,000, but they brought Death Valley to life as the two bitter rivals played the highest-scoring game in series history.

LSU scored 21 points off of Gators turnovers, including a pick-six by Dwight McGlothern just 48 seconds into the second half, that gave the Tigers a 28-13 lead.

It was a tremendous reversal for a game that opened with all of the familiar feels of another loss.

LSU punted on each of its first three possessions, running 11 plays and amassing just 25 yards, while falling behind 6-0.

But the Tigers would respond with their most inspired play of the season.

A 13-play, 90 yard drive set the tone. Davis-Price accounted for 52 yards, finishing it off with an 18-yard run. Cade York’s extra-point would give the Tigers a 7-6 lead that they ultimately wouldn’t relinquish.

Dan Mullen sent in Anthony Richardson to start the next drive for the Gators, but the result was the same. This time, Jay Ward picked off the pass to set LSU up at the Florida 21.

As many takeaways as LSU produced, its defense also gave away its share of big plays. With 29 seconds remaining in the first half, Florida was able to go 77 yards in four plays for a score. Jones found Justin Shorter all alone in the end zone for a “Hail Mary” that required very little prayer to succeed.

After McGlothern’s pick six, the Gators continued to claw back into the game, scoring touchdowns on each of their next four possessions.

Once again, Florida would answer. Anthony Richardson’s third touchdown pass of the game, a 33-yarder to Jacob Copeland tied the score at 42.

Instead of on edge, Tiger Stadium remained electric as the offense put together another impressive drive. Davis-Price added 48 yards to his tally, bringing LSU down to the one yard line. On fourth and goal, Johnson hit Jenkins for what would prove to be the winning score.

With all of the controversy and uncertainty surrounding the program, this was an unforgettable afternoon in what has been a largely forgettable season.

Now, after ending its two-game losing streak, LSU (4-3, 1-2 SEC) next goes on the road to Oxford, where they will face the high-powered Ole Miss offense.

It may not have been a win that salvaged a season, but the Tigers’ performance against Florida certainly salvaged a measure of pride. Both for LSU’s players, and their fans. 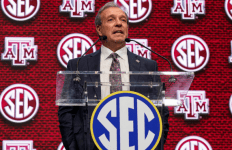