The multiple parishes that make up the region have produced some of the greatest high school players the state of Louisiana has ever seen. Carencro’s Kevin Faulk, New Iberia Senior High’s Johnny Hector, Teurlings Catholic’s Jake Delhomme, Cecilia’s Jamaican Dartez, Lafayette High’s Cedric Figaro and St. Martinville’s Early Doucet are just a handful of the area’s former high school stars that have produced some of the most memorable moments — and seasons — in Acadiana history.

But who was the absolute greatest of all time? That will soon be decided with 103.7 The Game’s “Acadiana’s Legends of the Fall” presented by Stan’s Auto Center.

The voters provided their Top 25 players of all time ranking them 1 to 25 with 1 being the highest. A total of 80 different former prep stars received votes but only the top 64 vote getters earned a spot in the bracket.

Now it will be up to you to help determine who will eventually be crowned as the greatest player in Acadiana high school history.

The voting for the Round of 64 begins on Monday, July 20th. It is free to vote and you can do so by visiting 1037thegame.com. Even after the voting closes for the opening round, you can keep coming back and vote for the Round of 32, the Sweet 16, Elite 8, Final Four and of course the championship matchup.

We will officially crown a champion by announcing the winner of the bracket live on RP3 & Company on Monday, August 10th.

So make sure you don’t miss out by casting your vote for 103.7 The Game’s “Acadiana’s Legends of the Fall” only at 1037thegame.com.

103.7 The Game broadcasting one-hour special “Cajuns in Conway” on Friday→ 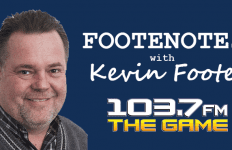