LSU baseball has gotten even better.

According to Kendall Rogers of D1Baseball, North Carolina State superstar Tommy White announced his transfer to LSU. White finished his freshman campaign at NC State in 2021 with 27 home runs.

White also had a .362 batting average and 74 RBIs in 2021 for the Wolfpack. He will come into Jay Johnson’s offense and provide an extra power bat to a stacked lineup.

However, Johnson and the Tigers weren’t done.

Little started 11 games as a freshman, putting together a 3-2 record with a 5.48 ERA with 49 strikeouts. Also of note, Vanderbilt was 9-2 in games Little started in 2020. Little also notched a 1-2 record in three starts this season.

Little has been compared to other great Vanderbilt pitchers like Jack Leiter and Kumar Rocker, which should make Tiger fans very happy.

Jay Johnson said on numerous occasions throughout the season that he and his coaching staff needed to address these issues, and they look to have done just that by signing two of the top players in the transfer portal. 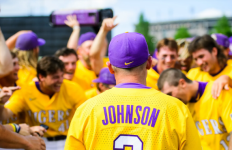